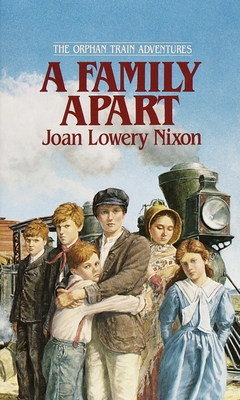 This is book number 1 in the Orphan Train Adventures series.

Imagine being taken from your home. Imagine your mother is the one who lets it happen.

This is the fate that befalls the Kelly children. It’s 1856, and their widowed mother has sent them west from New York City because she’s convinced that she can’t give them the life they deserve.

The Kellys board an “orphan train” and are taken to St. Joseph, Missouri, where their problems only grow worse. It was bad enough that they had to say goodbye to their mother, but now they’re forced to part ways with their fellow siblings as well. Thirteen-year-old Frances won’t stand for it. She’s going to protect her brothers and sisters, even if it means dressing up like a boy and putting herself in danger.

Will Frances be able to save her siblings? And what about her mom—was splitting up their family really her greatest act of love? Ride the rails with Frances and her siblings to find out!

“This is as close to a perfect book as you’ll buy this year.” –VOYA

Joan Lowery Nixon was the author of more than 130 books for young readers and was the only four-time winner of the Edgar Allan Poe Best Young Adult Mystery Award. She received the award for The Kidnapping of Christina Lattimore, The Séance, The Name of the Game Was Murder, and The Other Side of the Dark, which also won the California Young Reader Medal. Her historical fiction included the award-winning series The Orphan Train Adventures, Orphan Train Children, and Colonial Williamsburg: Young Americans.