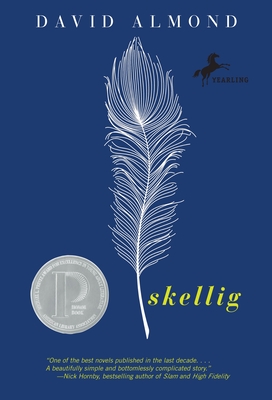 Ten-year-old Michael was looking forward to moving into a new house. But now his baby sister is ill, his parents are frantic, and Doctor Death has come to call. Michael feels helpless. Then he steps into the crumbling garage. . . . What is this thing beneath the spiders' webs and dead flies? A human being, or a strange kind of beast never before seen? The only person Michael can confide in is his new friend, Mina. Together, they carry the creature out into the light, and Michael's world changes forever. . . .

“I grew up in a big extended Catholic family [in the north of England]. I listened to the stories and songs at family parties. I listened to the gossip that filled Dragone’s coffee shop. I ran with my friends through the open spaces and the narrow lanes. We scared each other with ghost stories told in fragile tents on dark nights. We promised never-ending friendship and whispered of the amazing journeys we’d take together.

“I sat with my grandfather in his allotment, held tiny Easter chicks in my hands while he smoked his pipe and the factory sirens wailed and larks yelled high above. I trembled at the images presented to us in church, at the awful threats and glorious promises made by black-clad priests with Irish voices. I scribbled stories and stitched them into little books. I disliked school and loved the library, a little square building in which I dreamed that books with my name on them would stand one day on the shelves.

“Skellig, my first children’s novel, came out of the blue, as if it had been waiting a long time to be told. It seemed to write itself. It took six months, was rapidly taken by Hodder Children’s Books and has changed my life. By the time Skellig came out, I’d written my next children’s novel, Kit’s Wilderness. These books are suffused with the landscape and spirit of my own childhood. By looking back into the past, by re-imagining it and blending it with what I see around me now, I found a way to move forward and to become something that I am intensely happy to be: a writer for children.”

David Almond is the winner of the 2001 Michael L. Printz Award for Kit’s Wilderness, which has also been named best book of the year by School Library Journal, Booklist, and Publishers Weekly. He has been called "the foremost practitioner in children's literature of magical realism." (Booklist) His first book for young readers, Skellig, is a Printz Honor winner. David Almond lives with his family in Newcastle, England.

"Almond makes a triumphant debut in the field of children's literature with prose that is at once eerie, magical, and poignant."--Publishers Weekly, Starred

"Its strength as a novel is in its subtlety. . . . Skellig is a fine book."
--The New York Times Book Review

"Some of the writing takes one's breath away."--Booklist, Starred