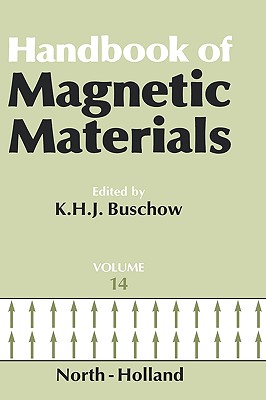 This is book number 14 in the Handbook of Magnetic Materials series.

Magnetoelectronics is a novel and rapidly developing field. This new field is frequently referred to as spin-electronics or spintronics. It includes spin-utilizing devices that need neither a magnetic field nor magnetic materials. In semiconductor devices, the spin of the carriers has only played a very modest role so far because well established semiconductor devices are non-magnetic and show only negligible effects of spin. Nanoscale thin films and multilayers, nanocrystalline magnetic materials, granular films, and amorphous alloys have attracted much attention in the last few decades, in the field of basic research as well as in the broader field of materials science. Such heterogeneous materials display uncommon magnetic properties that virtually do no occur in bulk materials. This is true, in particular with respect to surface (interface) magnetic anisotropy and surface (interface) magnetostrictive strains and giant magnetoresistance. The local atomic arrangement at the interface differs strongly from that in the bulk. The local symmetry is lowered, so that some interactions are changed or are missing altogether.
The interface atoms may envisaged as forming a new phase and some properties characteristic of this phase may become predominant for the entire system.
This becomes particularly evident in the case of interfacial magnetostriction which can lead to a decrease (almost to zero) or to an increase(over the bulk value) of the resulting magnetostriction of the nanoscale system.
There are various forms of the interplay of magnetism and superconductivity, which can be divided into competition and coexistence phenomena. For instance, a strong competition is found in high-Tc cuprates. In these materials, depending on the doping rate, either Neel-type antiferromagnetism moments (e.g. from 4f-elements) with superconductivity is known to occur in systems where the concentration of these moments is sufficiently small or where they are antiferromagnetically ordered and only weakly coupled to the conduction electrons.
During the years, intermetallic gadolinium compounds have adopted a special position in the study of 4f electron magnetism. The reason for this is the fact that the gadolinium moment consists only of a pure spin moment, orbital contributions to the moment being absent. As a consequence, gadolinium compounds have been regarded as ideal test benches for studying exchange interactions, free from complications due to crystal effects.
Volume 14 of the Handbook of Magnetic Materials, as the preceding volumes, has a dual purpose. As a textbook it is intended to be of assistance to those who wish to be introduced to a given topic in the field of magnetism without the need to read the vast amount of literature published. As a work of reference it is intended for scientists active in magnetism research. To this dual purpose, volume 14 of the Handbook is composed of topical review articles written by leading authorities. In each of these articles an extensive description is given in graphical as well as tabular form, much emphasis being placed on the discussion of the experimental material in the framework of physics, chemistry and material science.