Who Owns the World: The Surprising Truth About Every Piece of Land on the Planet (Paperback) 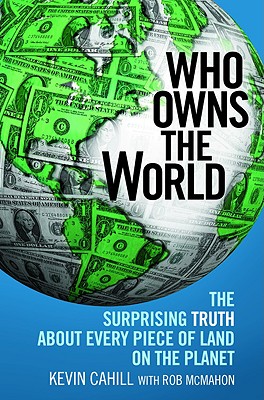 You don't have to be a student of geography or cartography to have an interest in the world around you, especially with globalization making our planet seem smaller than ever. Now you can IM someone in Alaska, purchase coffee beans from Timor-Leste, and visit Dubai. But what do we really know about these lands?

Who Owns the World presents the results of the first-ever landownership survey of all 197 states and 66 territories of the world, and reveals facts both startling and eye-opening. You'll learn that:
Only 15% of the world's population lays claim to landownership, and that landownership in too few hands is probably the single greatest cause of poverty.
Queen Elizabeth II owns 1/6 of the entire land surface on earth (nearly 3 times the size of the U.S.).
The Lichtenstein royal family is wealthier than the Grimaldis of Monaco.
80% of the American population is crammed in urban areas.
The least crowded state is Alaska, with 670 acres per person. The most crowded is New Jersey, with .7 acres per person. 60% of America's population are property owners. That's behind the UK (69% homeownership).
And much, much more!

With its relevance to contemporary issues and culture, Who Owns the World makes for fascinating reading. Both entertaining and educational, it provides cocktail party conversation for years to come and is guaranteed to change the way you view the U.S. and the world.

Kevin Cahill was born in the Irish Republic, and now lives in Devon, in the UK, with his wife. They have three daughters. A former army officer, Kevin has worked in the House of Commons, the House of Lords, the Irish Parliament, and the European Parliament as an adviser and researcher. He is the author of a number of books on business, trade, and landownership and was a researcher on the original Sunday Times Rich List.

Rob McMahon is a freelance writer and editor with more than fifteen years of experience in book publishing.