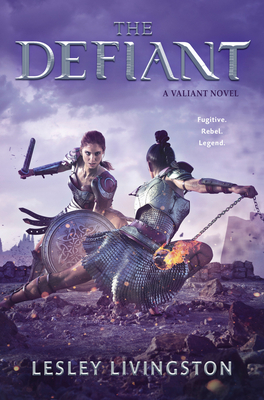 This is book number 2 in the Valiant series.

The darling of the Roman Empire is in for the fight of her life in this lush sequel to the acclaimed historical fantasy The Valiant.

Be brave, gladiatrix... And be wary. Once you win Caesar's love, you'll earn his enemies' hate.

Now she is about to pay the price for winning the love of the Roman people as Caesar's victorious gladiatrix.

In this highly anticipated sequel to THE VALIANT, Fallon and her warrior sisters find themselves thrust into a vicious conflict with a rival gladiator academy, one that will threaten not only Fallon's heart - and her love for Roman soldier Cai - but the very heart of the ancient Roman Empire.

When dark treachery and vicious power struggles threaten her hard-won freedom, the only thing that might help the girl known as Victrix save herself and her sisters is a tribe of long-forgotten mythic Amazon warriors.

The only trouble is, they might just kill her themselves first.

Lesley Livingston is an award-winning author of teen fiction, best known for her Wondrous Strange trilogy. She holds a master's degree in English from the University of Toronto and was a principal performer in a Shakespearean theater company, specializing in performances for teen audiences, for more than a decade. Visit her at www.lesleylivingston.com and follow her on Twitter @LesLivingston.

"As with the first book, there are rousing battle scenes and plenty of action, a few more romantic moments, and a strong feminist message. Give this to fans of the 2017 Wonder Woman movie and those looking for intelligent and powerful women who glory in their strength and abilities."
-Booklist