True Crimes and Misdemeanors: The Investigation of Donald Trump (CD-Audio) 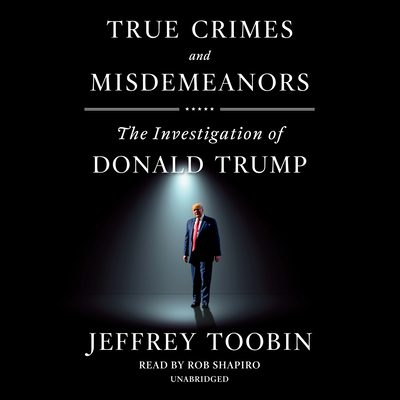 From CNN chief legal analyst and bestselling author Jeffrey Toobin, a real-life legal thriller about the prosecutors and congressional investigators pursuing the truth about Donald Trump's complicity in several crimes--and why they failed.

Donald Trump's campaign chairman went to jail. So did his personal lawyer. His long-time political consigliere was convicted of serious federal crimes, and his national security advisor pled guilty to others. Several Russian spies were indicted in absentia. Career intelligence agents and military officers were alarmed enough by the president's actions that they alerted senior government officials and ignited the impeachment process.

Yet despite all this, a years-long inquiry led by special counsel Robert Mueller, and the third impeachment of a president in American history, Donald Trump survived to run for re-election. Why?

Jeffrey Toobin's highly entertaining definitive account of the Mueller investigation and the impeachment of the president takes readers behind the scenes of the epic legal and political struggle to call Trump to account for his misdeeds. With his superb storytelling and analytic skills Toobin recounts all the mind-boggling twists and turns in the case--Trump's son met with a Russian operative promising Kremlin support! Trump paid a porn star $130,000 to hush up an affair! Rudy Giuliani and a pair of shady Ukrainian-American businessmen got the Justice Department to look at Russian-created conspiracy theories! Toobin shows how Trump's canny lawyers used Mueller's famous integrity against him, and how Trump's bullying and bluster cowed Republican legislators into ignoring the clear evidence of the impeachment hearings.

Based on dozens of interviews with prosecutors in Mueller's office, Trump's legal team, Congressional investigators, White House staffers, and several of the key players, including some who are now in prison, True Crimes and Misdemeanors is a revelatory narrative that makes sense of the seemingly endless chaos of the Trump years. Filled with never-before-reported details of the high-stakes legal battles and political machinations, the book weaves a tale of a rogue president guilty of historic misconduct, and how he got away with it.

Jeffrey Toobin is the bestselling author of The Oath, The Nine, Too Close to Call, A Vast Conspiracy, and The Run of His Life, which was made into the critically acclaimed FX series American Crime Story: The People v. O.J. Simpson. He is a staff writer at the New Yorker and the senior legal analyst at CNN.

Rob Shapiro is a voice actor, narrator, musician, and writer. In his spare time, he is working on his first book.

“Authoritative... A smart recap of the past four years, punctuated by insider details about the investigations and Toobin’s judgments on the lawyering skills and ethics of various players. The author has no patience for James Comey’s sanctimony and “faux humility.” ...Rosenstein is “disoriented and out of his depth,” committing legal and political “malpractice” by letting Trump use him to justify Comey’s firing. And Barr is “sycophantic,” a “toady” who evolved from “principled conservative to Trump apologist.”

"At some point in the future, it is entirely possible that the full details of Donald Trump's business affairs, personal imbroglios and political maneuverings will be laid bare to the public. Should that happen, it is easy to imagine much of the world wondering how the man got away with so much for so long. In that hour, readers may well turn to True Crimes and Misdemeanors: The Investigation of Donald Trump....This work is more than a journalist emptying his notebook of all his interviews and insights. It is more than a legal expert analyzing how the best work of talented and committed lawyers could be frustrated by governmental rules and rivalries within the executive and legislative powers in our federal system. Perhaps its highest function is as a condensation of the best evidence against the presidency and character of Donald Trump, a summation offered up much as a prosecutor would do in seeking to sway a jury."
-Ron Elving, NPR.Org