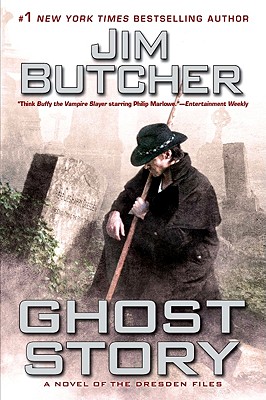 By Jim Butcher
Unavailable. Orders will be auto-cancelled.

This is book number 13 in the Dresden Files (ROC Hardcover) series.

The eagerly awaited new novel in the #1 "New York Times" bestselling Dresden Files series.
When we last left the mighty wizard detective Harry Dresden, he wasn't doing well. In fact, he had been murdered by an unknown assassin.
But being dead doesn't stop him when his friends are in danger. Except now he has nobody, and no magic to help him. And there are also several dark spirits roaming the Chicago shadows who owe Harry some payback of their own.
To save his friends-and his own soul-Harry will have to pull off the ultimate trick without any magic...
Watch a Video

A martial arts enthusiast whose resume includes a long list of skills rendered obsolete at least two hundred years ago, Jim Butcher turned to writing as a career because anything else probably would have driven him insane. He lives with his wife, his son and a ferocious guard dog.