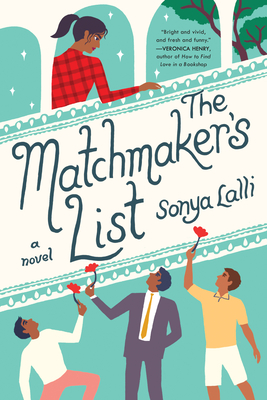 By Sonya Lalli
$15.00
Not available to order

One devoted modern girl + a meddlesome, traditional grandmother = a heartwarming multicultural romantic comedy about finding love where you least expect it.

Raina Anand may have finally given in to family pressure and agreed to let her grandmother play matchmaker, but that doesn't mean she has to like it--or that she has to play by the rules. Nani always took Raina's side when she tried to push past the traditional expectations of their tight-knit Indian-immigrant community, but now she's ambushing Raina with a list of suitable bachelors. Is it too much to ask for a little space? Besides, what Nani doesn't know won't hurt her...

As Raina's life spirals into a parade of Nani-approved bachelors and disastrous blind dates, she must find a way out of this modern-day arranged-marriage trap without shattering her beloved grandmother's dreams.

Sonya Lalli is a Canadian writer of Indian heritage. She studied law in her hometown of Saskatoon and at Columbia University in New York, and later completed an MA in Creative Writing and Publishing at City, University of London. Sonya has a black belt in Tae Kwon Do and loves travel, yoga and cocktail bartending. She lives in Toronto with her husband.

“Sonya Lalli offers up a tale of familial pressures, cultural traditions, and self-discovery, that is equal turns heartbreaking and hilarious...Lalli tears down stereotypes with humor and warmth.”—Entertainment Weekly

“Lalli’s sharp-eyed tale of cross-cultural dating, family heartbreak, the strictures of culture, and the exuberance of love is both universal and timeless.”—Publishers Weekly (starred review)

“Bright and vivid, and fresh and funny—I was utterly charmed by this insight into Raina's struggle to be the perfect Indian daughter.”—Veronica Henry, author of How to Find Love in a Bookshop

“A riotous odyssey into the pressures of cross-cultural modern dating that will chime with every 20-something singleton.”—ELLE (UK)

“The Matchmaker's List comes through in spades (and hearts).”—NPR