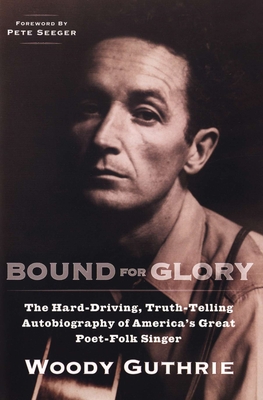 First published in 1943, this autobiography is also a superb portrait of America's Depression years, by the folk singer, activist, and man who saw it all.

Woody Guthrie was born in Oklahoma and traveled this whole country over—not by jet or motorcycle, but by boxcar, thumb, and foot. During the journey of discovery that was his life, he composed and sang words and music that have become a national heritage. His songs, however, are but part of his legacy. Behind him Woody Guthrie left a remarkable autobiography that vividly brings to life both his vibrant personality and a vision of America we cannot afford to let die.

“Even readers who never heard Woody or his songs will understand the current esteem in which he’s held after reading just a few pages… Always shockingly immediate and real, as if Woody were telling it out loud… A book to make novelists and sociologists jealous.”
—The Nation

WOODY GUTHRIE (1912-1967) was a legendary American folk singer-songwriter. His songs told the stories of the American people: their land, their labors, their trials and their joys. While many of his songs were born of his experience in the Dust Bowl during the Great Depression, "Honeyky Hanukah" was part of a little-known series of songs he wrote celebrating Jewish culture, inspired by his mother in law, Aliza Greenblatt, a well-known Yiddish poet who lived across the street from him during his years in Coney Island, New York.

“Even readers who never heard Woody or his songs will understand the current esteem in which he’s held after reading just a few pages… Always shockingly immediate and real, as if Woody were telling it out loud… A book to make novelists and sociologists jealous.”—The Nation

"Deserves the attention of this generation... It is not only a fascinating autobiography, it is a voice from the grass roots of America... Woody speaks for the indomitable spirit of an independent man who set out to do his own thing."—Library Journal

"Woody Guthrie was the greatest composer and singer of folk songs America has produced. In his autobiography, he tells how he grew up in Oklahoma, rode the rails, and found inspiration for his music through his own hard times during the Depression. As his songs attrest, he's a good prose stylist, with an ear for the patterns of American speech."—The Washington Post