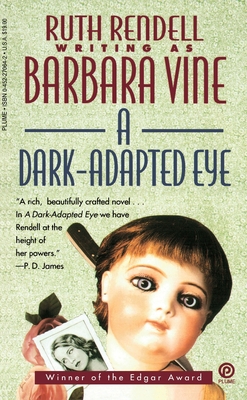 "Dazzling...writing at her formidable best, Barbara Vine taps the poetry as well as the pain of her characters' clamorous declarations of their need for love." —New York Times Book Review

"When the best mystery writer in the English-speaking world launched a second byline, she actually stepped up her writing a level." —TIME

Faith Severn has grown up with the dark cloud of murder looming over her family. Her aunt Vera Hillyard, a rigidly respectable woman, was convicted and hanged for the crime, but the reason for her desperate deed died with her. Thirty years later, a probing journalist pushes Faith to look back to the day when her aunt took knife in hand and walked into a child's nursery. Through the eyes of a woman trying to understand an unspeakable, inexplicable family tragedy, Barbara Vine leads us through a shadow land of illicit lust, intimate sins, and unspoken passions—to a shattering and illuminating climax, as inevitable as it is unexpected. In this enthralling masterpiece, a great crime writer has achieved both a flawlessly crafted novel of psychological suspense and a deeply probing work of literary art.

Barbara Vine is the pseudonym of Ruth Rendell. Considered by many to be Britain's greatest living crime writer, Rendell was awarded the Crime Writers' Association Diamond Dagger for a lifetime's achievement in crime writing in 1991, which sits nicely next to her four Gold Daggers and one Silver Dagger, and her three Edgar Allen Poe Awards from the Mystery Writers of America, including a Grandmaster Award from the aforementioned MWA.