The Aquariums of Pyongyang: Ten Years in the North Korean Gulag (Paperback) 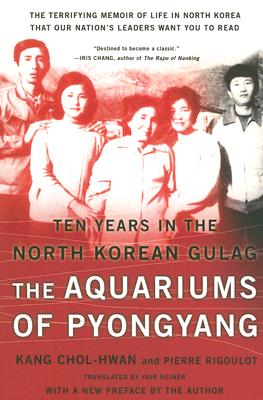 By Chol-hwan Kang, Pierre Rigoulot
$16.99
Backordered. Place an order and we will let you know when to expect your book.

"Destined to become a classic" (Iris Chang, author of The Rape of Nanking), this harrowing memoir of life inside North Korea was the first account to emerge from the notoriously secretive country -- and it remains one of the most terrifying.

Amid escalating nuclear tensions, Kim Jong-un and North Korea's other leaders have kept a tight grasp on their one-party state, quashing any nascent opposition movements and sending all suspected dissidents to its brutal concentration camps for "re-education."

Kang Chol-Hwan is the first survivor of one of these camps to escape and tell his story to the world, documenting the extreme conditions in these gulags and providing a personal insight into life in North Korea. Sent to the notorious labor camp Yodok when he was nine years old, Kang observed frequent public executions and endured forced labor and near-starvation rations for ten years. In 1992, he escaped to South Korea, where he found God and now advocates for human rights in North Korea.

Kang Chol-Hwan is founder and president of the North Korea Strategy Center.

Pierre Rigoulot is a journalist, historian, and human rights activist living in Paris, France. He is the author of numerous books on the history of political repression and contributed the North Korean chapter to the bestselling The Black Book of Communism.

"The Aquariums of Pyongyang is one of the most terrifying memoirs I have ever read. As the first account to emerge from North Korea, it is destined to become a classic."—Iris Chang, authorof The Rape of Nanking

"A
triumph against silence."
—Financial Times

"A
chilling testimony.... Freezes the heart and seizes the soul."
—Kirkus Reviews