The Mystery of Capital: Why Capitalism Triumphs in the West and Fails Everywhere Else (Paperback) 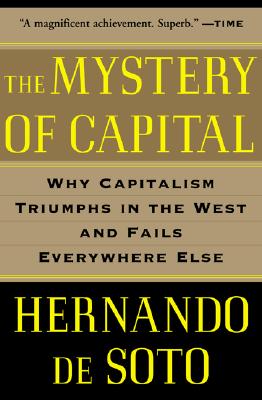 A renowned economist's classic book on capitalism in the developing world, showing how property rights are the key to overcoming poverty

"The hour of capitalism's greatest triumph," writes Hernando de Soto, "is, in the eyes of four-fifths of humanity, its hour of crisis." In The Mystery of Capital, the world-famous Peruvian economist takes up one of the most pressing questions the world faces today: Why do some countries succeed at capitalism while others fail?
In strong opposition to the popular view that success is determined by cultural differences, de Soto finds that it actually has everything to do with the legal structure of property and property rights. Every developed nation in the world at one time went through the transformation from predominantly extralegal property arrangements, such as squatting on large estates, to a formal, unified legal property system. In the West we've forgotten that creating this system is what allowed people everywhere to leverage property into wealth. This persuasive book revolutionized our understanding of capital and points the way to a major transformation of the world economy.

Hernando de Soto is President of the Institute for Liberty and Democracy (ILD), headquartered in Lima, Peru. He was named one of the five leading Latin American innovators of the century by Time magazine in its May 1999 issue on "Leaders for the New Millennium." De Soto played an integral role in the modernization of Peru's economic and political system as President Alberto Fujimori's Personal Representative and Principal Adviser.

His previous book, The Other Path, was a bestseller throughout Latin America and the U.S. He and ILD are currently working on the practical implementation of the measures for bringing the poor into the economic mainstream introduced in The Mystery of Capital. He lives in Lima, Peru.

"The blueprint for a new industrial revolution."—The Times (London)

"The most intelligent book yet written about the current challenge of establishing capitalism in the developing world."—Economist

"If a nonmathematician can win a Nobel Prize in Economics, I nominate de Soto."—Lawrence Minard, Forbes Global

"In his smart new book, The Mystery of Capital, de Soto answers the question why capitalism succeeds in the West and fails in so many other places."—Thomas Friedman, New York Times

"Some books are good, some are bad, but very few are real gems. One of the few gems is the recently published book, The Mystery of Capital."—Thomas Sowell