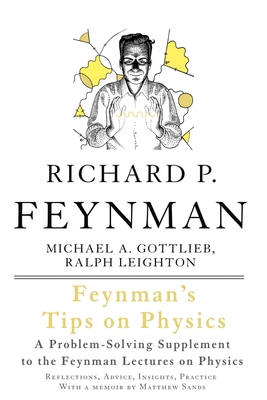 Feynman's Tips on Physics is a delightful collection of Richard P. Feynman's insights and an essential companion to his legendary Feynman Lectures on Physics

With characteristic flair, insight, and humor, Feynman discusses topics physics students often struggle with and offers valuable tips on addressing them. Included here are three lectures on problem-solving and a lecture on inertial guidance omitted from The Feynman Lectures on Physics. An enlightening memoir by Matthew Sands and oral history interviews with Feynman and his Caltech colleagues provide firsthand accounts of the origins of Feynman's landmark lecture series. Also included are incisive and illuminating exercises originally developed to supplement The Feynman Lectures on Physics, by Robert B. Leighton and Rochus E. Vogt.

Feynman's Tips on Physics was co-authored by Michael A. Gottlieb and Ralph Leighton to provide students, teachers, and enthusiasts alike an opportunity to learn physics from some of its greatest teachers, the creators of The Feynman Lectures on Physics.

Richard P. Feynman was Richard Chace Tolman Professor of Theoretical Physics at the California Institute of Technology. He was awarded the 1965 Nobel Prize for his work on the development of quantum field theory. He was also one of the most famous and beloved figures of the twentieth century, both in physics and as a public intellectual.

Ralph Leighton is an author, lateral thinker, and longtime friend of the late Richard Feynman.

"Always worthwhile to return to the feet of the master."—Bill Gates, Wired