Where Mathematics Come From: How The Embodied Mind Brings Mathematics Into Being (Paperback) 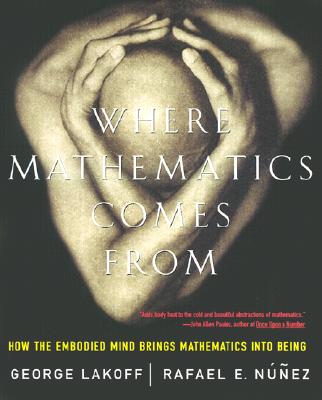 This book is about mathematical ideas, about what mathematics means-and why. Abstract ideas, for the most part, arise via conceptual metaphor-metaphorical ideas projecting from the way we function in the everyday physical world. Where Mathematics Comes From argues that conceptual metaphor plays a central role in mathematical ideas within the cognitive unconscious-from arithmetic and algebra to sets and logic to infinity in all of its forms.

George Lakoff is professor of linguistics at the University of California at Berkeley, and the coauthor, with Mark Johnson, of Metaphors We Live By. He was one of the founders of the generative semantics movements in linguistics in the 1960s, a founder of the field of cognitive linguistics in the 1970s, and one of the developers of the neural theory of language in the 1980s and '90s. His other books include More Than Cool Reason (with Mark Turner), Women, Fire, and Dangerous Things, and Moral Politics.