The Beloved Community: How Faith Shapes Social Justice from the Civil Rights Movement to Today (Paperback) 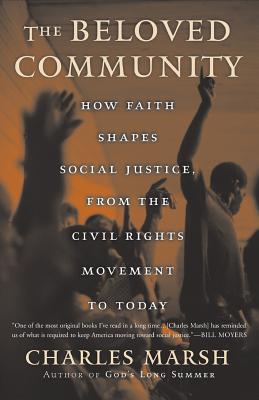 Speaking to his supporters at the end of the Montgomery bus boycott in 1956, Martin Luther King, Jr., declared that their common goal was not simply the end of segregation as an institution. Rather, "the end is reconciliation, the end is redemption, the end is the creation of the beloved community." King's words reflect the strong religious convictions that motivated the African American civil rights movement. As King and his allies saw it, "Jesus had founded the most revolutionary movement in human history: a movement built on the unconditional love of God for the world and the mandate to live in that love." Through a commitment to this idea of love and to the practice of nonviolence, civil rights leaders sought to transform the social and political realities of twentieth-century America.

In The Beloved Community, theologian and award-winning author Charles Marsh traces the history of the spiritual vision that animated the civil rights movement and shows how it remains a vital source of moral energy today. The Beloved Community lays out an exuberant new vision for progressive Christianity and reclaims the centrality of faith in the quest for social justice and authentic community.

Charles Marsh is Commonwealth Professor of Religious Studies at the University of Virginia and Director of the Project on Lived Theology. He is the author of several award-winning books, including Strange Glory: A Life of Dietrich Bonhoeffer, God's Long Summer, and The Last Days, and coauthor of Welcoming Justice. He lives in Charlottesville, Virginia.

"One of the most original books I've read in a long time...[Charles Marsh] has reminded us of what is required to keep America moving toward social justice."—Bill Moyers

"[Marsh] traces the influence of faith on the civil rights movement and argues that the spiritual underpinnings of that movement can serve as a source of moral energy today...an argument for the enduring power of progressive Christianity."—Ruth Graham, Slate

"Among the finest studies of the civil rights movement...Marsh writes lucidly and lyrically, fusing theology and history with a vigorous and unobtrusive intelligence."—Books and Culture

"A stirring account of Christian faith in action...the author makes a fervent pleas for spiritual renewal and recommitment."—Christian Science Monitor

"This book will want to make you stand up and should; and kneel and pray; and then go out and do something remarkable."—Lauren F. Winner, author of Girl Meets God and Mudhouse Sabbath

"[Marsh is] part historian, part raconteur, and part preacher...I found myself both moved to nostalgia and stirred to action as a I read his gripping account."—Philip Yancey, author of What's So Amazing About Grace