The Future of Violence: Robots and Germs, Hackers and Drones-Confronting A New Age of Threat (Hardcover) 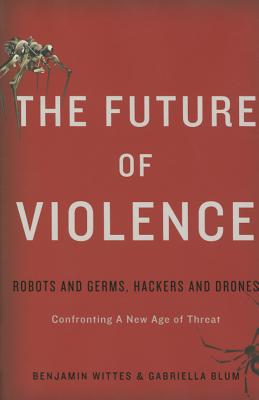 By Benjamin Wittes, Gabriella Blum
$35.00
Out of Stock; Usually Arrives in 2-5 Days

Two legal scholars explore the security and political implications of revolutionary new technologies from drones to 3-D printers, and explain how governments must adapt to our brave new world of dispersed threats.
From drone warfare in the Middle East to digital spying by the National Security Agency, the U.S. government has harnessed the power of cutting-edge technology to awesome effect. But what happens when ordinary people have the same tools at their fingertips? Advances in cybertechnology, biotechnology, and robotics mean that more people than ever before have access to potentially dangerous technologies-from drones to computer networks and biological agents-which could be used to attack states and private citizens alike.
In The Future of Violence, law and security experts Benjamin Wittes and Gabriella Blum detail the myriad possibilities, challenges, and enormous risks present in the modern world, and argue that if our national governments can no longer adequately protect us from harm, they will lose their legitimacy. Consequently, governments, companies, and citizens must rethink their security efforts to protect lives and liberty. In this brave new world where many little brothers are as menacing as any Big Brother, safeguarding our liberty and privacy may require strong domestic and international surveillance and regulatory controls. Maintaining security in this world where anyone can attack anyone requires a global perspective, with more multinational forces and greater action to protect (and protect against) weaker states who do not yet have the capability to police their own people. Drawing on political thinkers from Thomas Hobbes to the Founders and beyond, Wittes and Blum show that, despite recent protestations to the contrary, security and liberty are mutually supportive, and that we must embrace one to ensure the other.

The Future of Violence is at once an introduction to our emerging world--one in which students can print guns with 3-D printers and scientists' manipulations of viruses can be recreated and unleashed by ordinary people--and an authoritative blueprint for how government must adapt in order to survive and protect us.

Benjamin Wittes is a senior fellow in governance studies at the Brookings Institution and the editor-in-chief of Lawfare. He lives in Washington, D.C.
Gabriella Blum is the Rita E. Hauser Professor of Human Rights and International Humanitarian Law at Harvard Law School. She lives in Cambridge, Massachusetts.

"A book that manages to meld Hobbes, James Bond, science fiction, and Supreme Court decisions is a rare read. All the more impressive when it takes a complex set of urgent questions about the intersection of technology, security, and liberty, and offers insights and at least the beginnings of answers. Violence will be always with us, but its forms are changing in ways that challenge our ability to respond to and regulate it."—Anne-Marie Slaughter, President and CEO of New America

"Benjamin Wittes and Gabriella Blum have written a compelling and provocative book about an important topic we have not adequately faced: managing catastrophic risk in a technologically advanced society. I strongly recommend this book even for people who will not agree with the authors' conclusions."—ruce Schneier, author of Data and Goliath: The Hidden Battles to Collect Your Data and Control Your World

"What the authors achieve in this work is to raise the profile of issues at the intersection of biology, technology, and government policy.... Recommended to readers of governmental policy and the ethics of technology, who will be especially interested in this timely work."—Library Journal

"Citing Hobbes Locke, and Weber, the authors offer an impressive analysis of how the state will need to change to counter these threats. Publishers are competing to put out increasingly dire warnings about the fast-changing threats from cyber attacks, but The Future of Violence is original and insightful in turning to political theory for answers."
—Financial Times

"A lively and often terrifying exploration of the dark side of our technological age."
—Washington Post

"A careful, sophisticated analysis...In discussing how to combat [cybercrimes], the authors transcend clichés about tradeoffs between liberty and security, patiently explaining how without security, there is rarely much liberty."
—Foreign Affairs

"An alarming and informative new book.... The Future of Violence is a frightening book, but it's not an exercise in fear-mongering. Rather than arousing fear in order to advocate some dogmatic ideological agenda, Wittes and Blum offer a good example of a productive response to the world's multiplying horrors: thoughtful and realistic analysis of potential solutions.—Daily Beast