Heirs of an Honored Name: The Decline of the Adams Family and the Rise of Modern America (Hardcover) 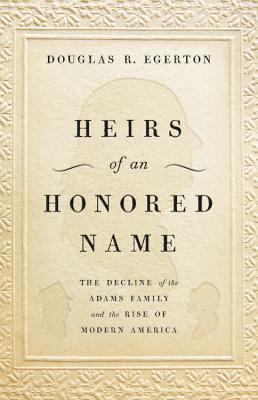 John and Abigail Adams founded a famous political family, but they would not witness its calamitous fall from grace. When John Quincy Adams died in 1848, so began the slow decline of the family's political legacy.

In Heirs of an Honored Name, award-winning historian Douglas R. Egerton depicts a family grown famous, wealthy -- and aimless. After the Civil War, Republicans looked to the Adamses to steer their party back to its radical 1850s roots. Instead, Charles Francis Sr. and his children -- Charles Francis Jr., John Quincy II, Henry and Clover Adams, and Louisa Adams Kuhn -- largely quit the political arena and found refuge in an imagined past of aristocratic preeminence.

An absorbing story of brilliant siblings and family strain, Heirs of an Honored Name shows how the burden of impossible expectations shaped the Adamses and, through them, American history.

Douglas R. Egerton is a professor of history at Le Moyne College. The award-winning author of eight previous books, including Thunder at the Gates and The Wars of Reconstruction, he lives in Fayetteville, New York.

"Deeply researched and brimming with anecdotes, from this narrative emerges not only the decline and fall of the Adams family but also the political scene of the nineteenth century, the rise of modern America, and the unavoidable parallels with our own time as a nation that finds itself increasingly divided."—Booklist

"Douglas Egerton has emerged as one of our nation's leading
historians... Egerton is to be praised for his in-depth coverage of not only the
sons of Charles Francis Adams, but also the women who married into the family.
Egerton uses the lives of Adams family members as a window into the Civil War
era."—Erik Chaput, Providence Journal

"Egerton brings to life the third and fourth generations of America's first political dynasty. Readers interested in 19th-century culture or the dynamics of American political families will find food for thought here."—Publishers Weekly

"Douglas Egerton's eloquent group biography of the descendants of Abigail and John Quincy Adams is a nineteenth-century secular version of Puritan declension. Following Charles Francis Adams's exemplary diplomatic service in Britain during the Civil War, the next generation, including his sons Charles and Henry, drifted into racism, anti-Semitism, and narcissistic self-pity-an inglorious sequel to three generations of America's most prominent founding family-chronicled by Egerton with sensitivity and nuance."—James M. McPherson, author of the Pulitzer Prize-winning Battle Cry of Freedom

"Douglas Egerton is one of the most versatile and accomplished historians of our time. Here he writes the saga of America's most extraordinary multi-generational political family. With lyrical and critical prose, Egerton chronicles the Adamses' rise and fall-the latter generations never making lives or imaginations that could match the impossible models of the founders. This is a must read for its family drama, its deep research, its richly American texture, and its cautionary tale for modern strivers."—David W. Blight,author of the Pulitzer prize-winning Frederick Douglass: Prophet of Freedom.

"In Douglas R. Egerton's brilliant telling, the story of this singular American dynasty becomes both accessible and captivating. The struggles of Charles Francis Adams and his sons to live up to the legacy of their illustrious forbears reveal a family at odds with itself: the Adamses' noble impulses of public service and sacrifice did battle with their corrosive competitiveness and patrician sense of entitlement. Their battle mirrors America's battle, in the turbulent nineteenth century and beyond, to reconcile the imperatives and reform and tradition."—Elizabeth R. Varon, author of Armies of Deliverance: A New History of the Civil War

"In this riveting saga of the personal tribulations of America's first family's later generations, Douglas Egerton beautifully charts the declension of the American Republic from its revolutionary and antislavery ideals. He adeptly mirrors the betrayal of emancipation and hopes for an interracial democracy after the Civil War in the Adams family's retreat from the duties of patriotism to narrow elitism. This is a collective historical biography of a superior order."
—Manisha Sinha, authorof The Slave's Cause: A History of Abolition

"The Adams family contributed a stunning procession of presidents, diplomats, historians, and intellectuals who played crucial roles in the birth and maturation of the republic and its salvation during the Civil War. In this wonderfully engaging book, one of the most eminent historians of this period tells a compelling story of how this seemingly indispensable family became superfluous to the nation it had so dutifully served."
—Don H. Doyle, authorof The Cause of All Nations: An International History of the American CivilWar

"If good biography tells us what we need to know about its subjects and the society they inhabit, then in this splendid life story of the Adams family, Douglas Egerton takes us on a troubling journey through the many ways this patrician family, and the country, abandoned their lofty principles and commitment to equality for a crass denial of rights."—Richard Blackett, author of The Captive's Quest for Freedom and Making Freedom

"This is a story of declension: the inter-generational devolution of a great American family line. In vivid and graceful prose, Douglas Egerton recounts the political and moral decay of the Adamses. In his time, John Quincy Adams became a leading, even heroic figure in the fight against slavery, a fight that eventually achieved victory through civil war. But in later years, his descendants turned their back on the principles that animated that struggle. In doing so, they paralleled and illuminated the retreat of the northern business and political elite as a whole from the goals of the nation's second democratic revolution."—Bruce Levine, authorof The Fall of the House of Dixie: The Civil War and the Social Revolutionthat Transformed the South