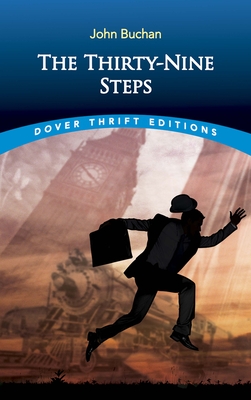 In this fast-paced spy thriller, a self-described ordinary fellow stumbles upon a plot involving not only espionage and murder but also the future of Britain itself. Richard Hannay arrives in London on the eve of World War I, where he encounters an American agent seeking help in preventing a political assassination. Before long, Hannay finds himself in possession of a little black book that holds the key to the conspiracy -- and on the run from both the police and members of a mysterious organization that will stop at nothing to keep their secrets hidden.
This is the first of five novels in John Buchan's Greenmantle series, featuring the adventures of the stalwart and resourceful Richard Hannay. Originally published in 1915, it also served as the basis for several movies and plays, including Alfred Hitchcock's classic cinematic adaptation.

Scottish-born John Buchan (1875-1940) was a lawyer, publishing executive, historian, army officer, and a Member of Parliament as well as the author of more than 100 books. In 1935 he was made first Baron Tweedsmuir and appointed Governor-General of Canada.