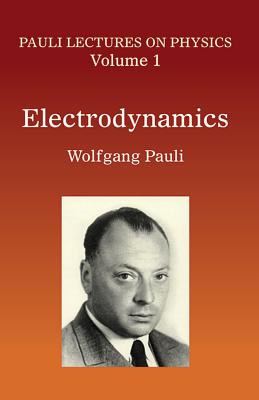 This is book number 1 in the Dover Books on Physics series.

In the 1950s, the distinguished theoretical physicist Wolfgang Pauli delivered a landmark series of lectures at the Swiss Federal Institute of Technology in Zurich. His comprehensive coverage of the fundamentals of classical and modern physics was painstakingly recorded not only by his students but also by a number of collaborators, whose carefully edited transcriptions resulted in a remarkable six-volume work.
This volume, the first of the series, presents a brief survey of the historical development and then-current problems of electrodynamics, followed by sections on electrostatics and magnetostatics, steady-state currents, quasi-static fields, and rapidly varying fields. As does each book in the series, Volume 1 includes an index and a wealth of helpful figures, and can be read independently of the series by those who wish to focus on a particular topic.
Originally published in 1973, the text remains entirely relevant thanks to Pauli's manner of presentation. As Victor F. Weisskopf notes in the Foreword to the series, Pauli's style is commensurate to the greatness of its subject in its clarity and impact. Pauli's lectures show how physical ideas can be presented clearly and in good mathematical form, without being hidden in formalistic expertise. Alone or as part of the complete set, this volume represents a peerless resource invaluable to individuals, libraries, and other institutions.

Linus Pauling: Two-Time Nobel LaureateIn 1985 Dover reprinted Introduction to Quantum Mechanics with Applications to Chemistry, a well-known older book by Linus Pauling and E. Bright Wilson. This book had been first published fifty years earlier and remarkably still found readers in 1985, and still does today, twenty-five years further on.The first edition of Pauling's General Chemistry was a short book of lessr than 250 pages published in 1944, during World War II. Three years later, it had more than doubled in size to almost 600 pages, and the 1953 edition was over 700 pages. Fifteen years later, for the 1970 edition, it reached its final size and configuration at almost 1,000 pages ― and that is the edition which Dover reprinted in 1988. Dr. Pauling's one request at that time was that we keep the price affordable for students.Linus Pauling is of course the only Dover author to win two Nobel prizes, for Chemistry in 1954 and for Peace in 1962; he is the only winner in history of two unshared Nobel Prizes.In the Author's Own Words: "Satisfaction of one's curiosity is one of the greatest sources of happiness in life.""Do unto others 20% better than you would expect them to do unto you, to correct for subjective error.""The way to get good ideas is to get lots of ideas, and throw the bad ones away.""Facts are the air of scientists. Without them you can never fly." -- Linus PaulingCritical Acclaim for General Chemistry "An excellent text, highly recommended." -- Choice