A Treatise on Electricity and Magnetism, Vol. 1: Volume 1 (Dover Books on Physics #1) (Paperback) 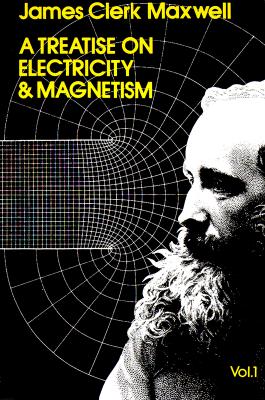 This is book number 1 in the Dover Books on Physics series.

Maxwell is without peer. This printing is an opportunity to become thoroughly acquainted with the thoughts of the greatest of our electrical scientists. -- School Science and Math
Here is the final elaboration of Maxwell's theory of electromagnetism, including the systematic and rigorous derivation of his general equations of field theory. These equations continue to occupy a central position in the modern physicist's view of the physical world. They are a magnificent summary of the fundamental advances in electricity and magnetism, and later inspired the theories of Lorentz on the electron and Einstein on relativity. Einstein himself has said that The formulation of these equations is the most important event in physics since Newton's time. (The Evolution of Physics.)
Volume 1, Part 1, Electrostatics, describes electrostatic phenomena and develops a mathematical theory of electricity. Maxwell discusses electrical work and energy in a system of conductors, mechanical action between two electrical systems, forms of equipotential surfaces and line of flow, spherical harmonics, the theory of electric images, and other topics. Part II, Electrokinematics, deals with electric current conduction and resistance, electromotive force between bodies in contact, electrolysis, the mathematical theory of the distribution of electric currents, and other topics.

James Clerk Maxwell: In His Own Words -- And Others Dover reprinted Maxwell's Treatise on Electricity and Magnetism in 1954, surely one of the first classics of scientific literature over a thousand pages in length to be given new life and accessibility to students and researchers as a result of the paperback revolution of the 1950s. Matter and Motion followed in 1991 and Theory of Heat in 2001. Some towering figures in science have to speak for themselves. Such is James Clerk Maxwell (1813-1879), the Scottish physicist and mathematician who formulated the basic equations of classical electromagnetic theory. In the Author's Own Words: We may find illustrations of the highest doctrines of science in games and gymnastics, in traveling by land and by water, in storms of the air and of the sea, and wherever there is matter in motion. The 2nd law of thermodynamics has the same degree of truth as the statement that if you throw a tumblerful of water into the sea, you cannot get the same tumblerful of water out again. -- James Clerk Maxwell Critical Acclaim for James Clerk Maxwell: From a long view of the history of mankind -- seen from, say, ten thousand years from now -- there can be little doubt that the most significant event of the 19th century will be judged as Maxwell's discovery of the laws of electrodynamics. The American Civil War will pale into provincial insignificance in comparison with this important scientific event of the same decade. -- Richard P. Feynman Maxwell's equations have had a greater impact on human history than any ten presidents. -- Carl Sagan