Black Wings Has My Angel (Paperback) 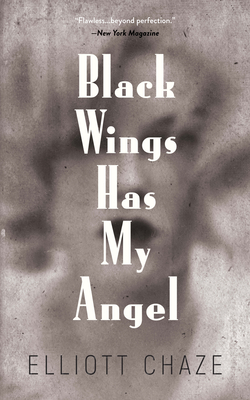 "Flawless ... beyond perfection." -- New York Magazine
"An astonishingly well-written literary novel that just happened to be about (or roundabout) a crime." -- Barry Gifford
"Black Wings Has My Angel is an indisputable noir classic ... Elliott Chaze was a fine prose stylist, witty, insightful, nostalgic, and irreverent, and a first-class storyteller." -- Bill Pronzini
An escaped convict encounters an enterprising prostitute at the start of this hard-boiled masterpiece. When Timothy Sunblade opens the door of his blue Packard to Virginia, their fates are forever intertwined. "Maybe if you saw her you'd understand," he reminisces. "Face by Michelangelo, clothes they drape on those models in Vogue, and a past out of a tabloid front page ... Virginia, who came for one paid hour -- and stayed for all eternity." After double-crossing and beating each other black-and-blue, the pair conspire to rob an armored car. But pulling off the ultimate heist is only the beginning of their troubles. Written during the golden age of American pulp fiction, this unforgettable novel pulses with energy, atmosphere, and dark humor.

After serving as a paratrooper in Japan during World War II, Elliott Chaze (1915-1990) settled in Mississippi, where he worked for 20 years as an award-winning reporter and editor at the Hattiesburg American. His nine novels include The Stainless Steel Kimono, which he based on his wartime experiences, Goodbye Goliath, and Wettermark.