Saint Joan: A Chronicle Play in Six Scenes and an Epilogue (Paperback) 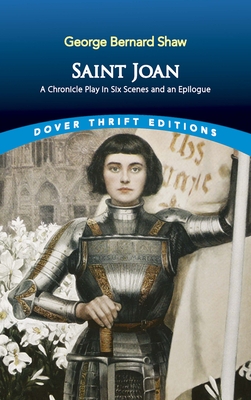 Hailed by T. S. Eliot as "a dramatic delight," George Bernard Shaw's only tragedy traces the life of the peasant girl who led French troops to victory over the English in the Hundred Years' War. An avid socialist, Shaw regarded his writing as a vehicle for promoting his political and humanitarian views and exposing hypocrisy. With Saint Joan, he reached the height of his fame, and it was this play that led to his Nobel Prize in Literature for 1925.
In the six centuries since her martyrdom, Joan of Arc has inspired artists, musicians, and writers. Shaw's heroine is unlike any previous interpretation -- not a witch, saint, or madwoman but a pre-feminist icon, possessed of innate intelligence and leadership qualities that challenge the authority of church and state. She is also a real human being, warm and sincere, whose flaws include an obstinacy that leads to her undoing. This edition includes a substantial, informative Preface by the author.

In the course of his long and prolific career, George Bernard Shaw (1856-1950) wrote 60 plays, in addition to music and literary criticism. An avid socialist, he regarded his writing as a vehicle for promoting his political and humanitarian views. With Saint Joan, Shaw reached the height of his fame, and it was this play that led to his Nobel Prize for Literature for 1925.