The Gates of the Alamo (Paperback) 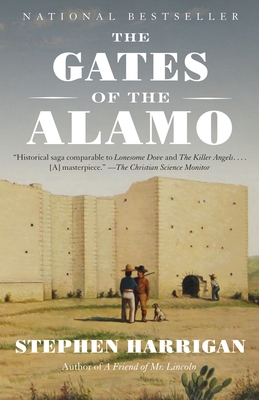 It’s 1836, and the Mexican province of Texas is in revolt. As General Santa Anna’s forces move closer to the small fort that will soon be legend, three people’s fates will become intrinsically tied to the coming battle: Edmund McGowan, a proud and gifted naturalist; the widowed innkeeper Mary Mott; and her sixteen-year-old son, Terrell, whose first shattering experience with love has led him into the line of fire.

Filled with dramatic scenes, and abounding in fictional and historical personalities—among them James Bowie, David Crockett, William Travis, and Stephen Austin—The Gates of the Alamo is a faithful and compelling look at a riveting chapter in American history.

Stephen Harrigan is the author of ten books, including A Friend of Mr. Lincoln and Remember Ben Clayton, which among other awards won the James Fenimore Cooper Prize from the Society of American Historians for best historical novel. He is also a writer-at-large for Texas Monthly and a screenwriter who has written many movies for television. He lives in Austin, Texas.

“Historical saga comparable to Lonesome Dove and The Killer Angels…. [A] masterpiece.” —The Christian Science Monitor

“The historical novel at its best. . . . Harrigan [has] emerged as the leading Texan writer of his generation and an American writer of the first rank.”  —San Francisco Chronicle

“The first great novel of the 21st century. . . .  This is storytelling at its finest." —Fort Worth Star-Telegram

“Engrossing. . . . Calls to mind the best of Larry McMurtry and Cormac McCarthy.” —The Wall Street Journal

“Deserves a place among the best books ever written about this legendary battle.” —Minneapolis Star-Tribune

“Riveting. . . . The strength of Harrigan’s extraordinarily authentic novel is its superior storytelling, no small accomplishment when a writer is looking down the hot barrel of history.” —The Washington Post

“[Here] a time and a place, a vanished world in which gallant death and honor still held tangible appeal, while merciless slaughter was more likely the rule, are evoked with great skill.” —The New York Times Book Review

“Harrigan captures how the Alamo transformed a scattered series of frontier conflicts into a legitimate revolution.” —Mark Bowden, author of Black Hawk Down

“A Texas classic that will take its place on the shelf beside Lonesome Dove and All the Pretty Horses.” —Austin American-Statesman

“Classic. The Gates of the Alamo tells the epic story of the legendary battle from both the Mexican and American perspectives.” —Margaret George, author of The Autobiography of King Henry VIII

“Races like a wild mustang. . . . Call this one a page-whirlwind, a vast and vicious tale.” —Detroit Free Press

“Succeeds in reinventing a tired American icon. Harrigan makes the Alamo worth remembering one more time.” —The Denver Post

“Let’s begin with the adjectives. Magnificent. Fabulous. . . Masterful both as pulsating tale and provocative history. “  —The Philadelphia Enquirer