The Future of Humanity: Our Destiny in the Universe (Paperback) 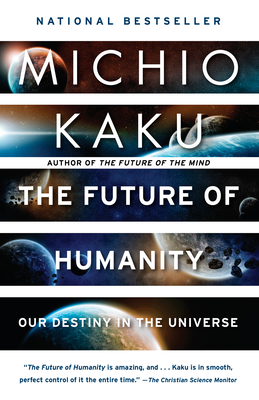 The #1 bestselling author of The Future of the Mind traverses the frontiers of astrophysics, artificial intelligence, and technology to offer a stunning vision of man's future in space, from settling Mars to traveling to distant galaxies.

We are entering a new Golden Age of space exploration. With irrepressible enthusiasm and a deep understanding of the cutting-edge research in space travel, World-renowned physicist and futurist Dr. Michio Kaku presents a compelling vision of how humanity may develop a sustainable civilization in outer space. He reveals the developments in robotics, nanotechnology, and biotechnology that may allow us to terraform and build habitable cities on Mars and beyond. He then journeys out of our solar system and discusses how new technologies such as nanoships, laser sails, and fusion rockets may actually make interstellar travel a possibility. We travel beyond our galaxy, and even beyond our universe, as Kaku investigates some of the hottest topics in science today, including warp drive, wormholes, hyperspace, parallel universes, and the multiverse. Ultimately, he shows us how humans may someday achieve a form of immortality and be able to leave our bodies entirely, laser porting to new havens in space.

Michio Kaku is a professor of theoretical physics at the City University of New York, co-founder of string field theory, and the author of several widely acclaimed science books, including Beyond Einstein, The Future of the Mind, Hyperspace, Physics of the Future, and Physics of the Impossible. He is the science correspondent for CBS This Morning, and host of numerous TV science specials and of the radio programs Science Fantastic and Exploration.

“The wide popular interest in Elon Musk’s recent launch of one of his own Tesla cars into space shows the extent to which space travel has again become mass entertainment as well as, perhaps, mass aspiration. It is good timing, then, for a book by the theoretical physicist Michio Kaku on the possible paths to our future as a galaxy-trotting species. . . . With admirable clarity and ease, Mr. Kaku rehearses the history of rocketry and the formation of the planets, and explains how we might colonize not only Mars but some of the rocky moons of the gas giants Jupiter and Saturn. . . . The book has an infectious, can-do enthusiasm.”
—Steven Poole, The Wall Street Journal

“Kaku is a practiced and very effective popularizer of science for a general audience; he's unfailingly interesting, with an unerring instinct for the most thought-provoking aspects of his various subjects. The sheer amount of technical scientific speculation in The Future of Humanity is amazing, and yet Kaku is in smooth, perfect control of it the entire time.”
—Steve Donoghue, Christian Science Monitor

“Kaku has a real gift for this kind of popular science; he is able to render complex ideas in a manner that is sophisticated while still feeling accessible. . . . At the end of the day, when you’re looking through Michio Kaku’s eyes, the future looks bright indeed.”
—The Maine Edge

“An exhilarating look at the future. . . . Always optimistic and undaunted, Kaku delivers a fascinating . . . series of scenarios in which humans overcome current obstacles.”
—Kirkus

“Kaku’s writings have garnered a reputation for combining hard science with clever speculation, and his latest book continues that winning trend. A breathtaking voyage through what is almost certainly the next major period in the history of humanity.”
—Booklist