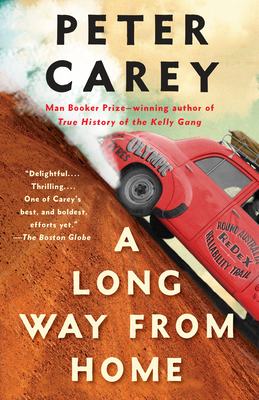 “Carey uses the Australian cross-country Redux auto trials of the 1950s to explore how the need to be accepted directs our motivations and, accordingly, our fates. Titch and Irene Bobs join up with their neighbor Willy Bachhuber, a maps expert, to race the Redux. For Titch, an opportunistic car salesman, the race represents the chance to seize national fame - and the respect of his larger-than-life father. Through the journey, Carey delves into Australia's virulent racism toward its indigenous populations and its embedded intolerance of miscegenation. As the miles accumulate, Irene and Willy's lives change in profound ways, and we, in turn, experience Carey's wit, heart, and intelligence, as well as his skill in bringing these characters and this place and time so vibrantly to life.”
— Lori Feathers, Interabang Books, Dallas, TX

Irene Bobs loves fast driving. Her husband is the best car salesman in southeastern Australia. Together they enter the 1954 Redex Trial, a weeks-long endurance contest of a car race that circles the entire continent. With them is their lanky, fair-haired navigator: deposed quiz show champion and failed schoolteacher Willie Bachhuber. If they win the Redex, the Bobs name alone will get them a dealership, and Willie will have recharged a life currently ground to a halt. But before any of that might happen, their official strip maps will lead them, without warning, out of the comfortable white Australia they know so well. A breakneck, often hilarious, eye-opening adventure that at the same time reminds us how white people took possession of a timeless culture—the high purpose they invented, and the crimes they committed along the way—A Long Way from Home is Peter Carey’s late-style masterpiece.

Peter Carey is the author of thirteen previous novels and is a two-time winner of the Booker Prize. His other honors include the Commonwealth Writers' Prize and the Miles Franklin Literary Award. Born in Australia, he has lived in New York City for more than twenty-five years.

“A rambunctious adventure story [transforms] into a potent exploration of racial identity.” —The New Yorker

“A funny, humane, and enchanting book that is among his finest.” —The New York Review of Books

“Complex and powerful. . . . His best novel in years, maybe decades.” —The Guardian

“Carey’s eye for zestful storytelling is as sharp as ever —as is his ventriloquist’s ear. . . . Not since True History of the Kelly Gang has he seemed so on-song.” —Financial Times

“A rollicking adventure [that] leads to a startling exchange of worlds. Bigotries are confronted. Hidden histories are revealed. . . . A Long Way from Home is a frolic with depth, a flight of fancy with tough resonance.” —The Seattle Times

“A major work and an exciting one. . . . Deep and affecting.” —St. Louis Post-Dispatch

“Evocative and exciting . . . Rip-roaring colour and action . . . this is the first time he's directly dealt with Aboriginal history, and A Long Way From Home is all the more powerful for it.”
—The Independent (London)

“We barrel along anarchically, marvelling at the elegance of Carey’s plotting and the explosive joy of the storytelling. . . . A moving meditation on multiple forms of paternal failure and the culture of racism that have shaped modern Australia." —The Spectator (London)

“Intriguing. . . . Compelling. . . . Surely fiction’s role is to provide both writer and reader with the kind of empathy only accessible via an imagination as generous and serious as that of a writer such as Peter Carey.” —The New Statesman

“Breaks new ground. . . . There is a sense of venturing into virgin territory, of a country opening up, of a reckoning, of long overdue discovery.” —Herald Scotland

“A Long Way from Home is a novel full of riches. The road race propels the plot along, but it’s really a book about cultural identity, about family, about the ability to empathise with others. As such, it’s hugely relevant for our times.” —Irish Times