This Storm: A novel (CD-Audio) 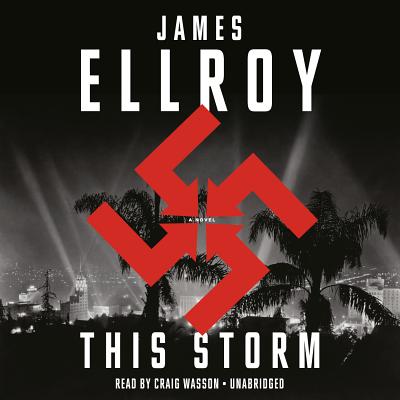 January '42. L.A. reels behind the shock of Pearl Harbor. Local Japanese residents are rounded up and slammed behind bars. Massive thunderstorms hit the city.

A body is unearthed in Griffith Park. The cops tag it a routine dead-man job. They're wrong. It's an early-warning signal of Chaos.

There's a murderous fire and a gold heist. There's Fifth Column treason on American soil. There are homegrown Nazis, Commies, and race racketeers. It's populism ascendant. There's two dead cops in a dive off the jazz-club strip. And three men and one woman have a hot date with history.

Elmer Jackson is a corrupt Vice cop. He's a flesh peddler and a bagman for the L.A. Chief of Police. Hideo Ashida is a crime-lab whiz, lashed by anti-Japanese rage. Dudley Smith is PD hardnose working Army Intelligence. He's gone rogue and gone all-the-way fascist. Joan Conville was born rogue. She's a defrocked Navy lieutenant and a war profiteer to her core.

L.A. '42. Homefront madness. Wartime inferno--This Storm is James Ellroy's most audacious novel yet. It is by turns savage, tender, elegiac. It lays bare and celebrates crazed Americans of all stripes. It is a masterpiece.

JAMES ELLROY was born in Los Angeles in 1948. He is the author of the Underworld U.S.A. Trilogy--American Tabloid, The Cold Six Thousand, and Blood's A Rover--and the L.A. Quartet novels, The Black Dahlia, The Big Nowhere, L. A. Confidential, and White Jazz. He lives in Colorado.

“One of the great American writers of our time.”
—Los Angeles Times

“Ask me to name the best living novelist who’s fierce, brave, funny, scatological, beautiful, convoluted, and paranoid . . . and it becomes simple: James Ellroy. If insanity illuminated by highly dangerous strokes of literary lightning is your thing, then Ellroy’s your man.”
—Stephen King