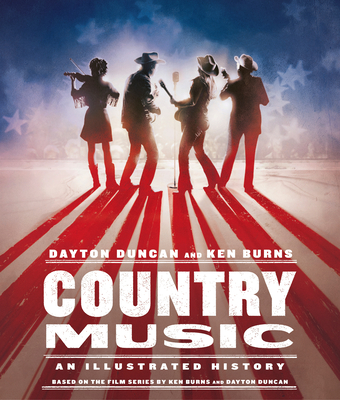 A gorgeously illustrated and hugely entertaining story of America's most popular music and the singers and songwriters who captivated, entertained, and consoled listeners throughout the twentieth century—based on the eight-part film series.

This fascinating history begins where country music itself emerged: the American South, where people sang to themselves and to their families at home and in church, and where they danced to fiddle tunes on Saturday nights. With the birth of radio in the 1920s, the songs moved from small towns, mountain hollers, and the wide-open West to become the music of an entire nation--a diverse range of sounds and styles from honky tonk to gospel to bluegrass to rockabilly, leading up through the decades to the music's massive commercial success today.

But above all, Country Music is the story of the musicians. Here is Hank Williams's tragic honky tonk life, Dolly Parton rising to fame from a dirt-poor childhood, and Loretta Lynn turning her experiences into songs that spoke to women everywhere. Here too are interviews with the genre's biggest stars, including the likes of Merle Haggard to Garth Brooks to Rosanne Cash. Rife with rare photographs and endlessly fascinating anecdotes, the stories in this sweeping yet intimate history will captivate longtime country fans and introduce new listeners to an extraordinary body of music that lies at the very center of the American experience.

DAYTON DUNCAN, writer and producer of Country Music, is the author of twelve other books, including Out West: An American Journey Along the Lewis and Clark Trail, in which he retraced the historic route of the expedition. He has worked with Ken Burns as a writer and producer of documentary films for nearly thirty years.

KEN BURNS, the producer and director of numerous film series, including Vietnam, The Roosevelts, and The War, founded his own documentary film company, Florentine Films, in 1976. His landmark film The Civil War was the highest-rated series in the history of American public television, and his work has won numerous prizes, including the Emmy and Peabody Awards, and two Academy Award nominations. He lives in Walpole, New Hampshire.

"It gives some of the deeper background on artists and on the places and songs that the film can’t fully provide. Duncan’s lavishly illustrated book — in many ways the photos alone are worth the price of the book and tell a compelling story themselves — well fulfills its purpose as a companion to the PBS series, encouraging us to swim in the many streams that flow into the big river of country music."
—No Depression

"An elegant encapsulation of the material in the documentary, detailing country’s evolution and emergence as a musical form with broader reach and inclusion than many might think."
—Nashville Scene

"Ken Burns' recent PBS opus charted the history of the music that put Nashville on the map. He and his co-producer Dayton Duncan have put equal care into this companion book."
—Newsday

"Master documentarian Burns and his stellar, longtime writer collaborator Duncan have produced another large, handsome, avidly researched volume bursting with vivid anecdotes and rare archival photographs... This dynamic and monumental history captures the spirit, resonance, variety, and power of country music as a balm for hard times, catalyst for good times, and vibrant expression of life’s obdurate complexities. While the Country Music documentary series offers sound and motion, the book offers a still, at-your-own-pace immersion that enriches the video experience and stands steady on its own."
—Booklist, starred review

"This voluminous and hugely entertaining introduction to country music coincides with the release of the eponymous PBS series, by producer and writer Duncan (Out West) and producer and filmmaker Burns (The Civil War)... The narrative—supported by concert photos and images of album jackets and various memorabilia—moves at a quick clip as the authors highlight the lives and music of such influential musicians as Patsy Cline, Loretta Lynn, Dolly Parton, and Hank Williams... Duncan’s and Burns’s lavishly illustrated and cinematic narrative will stand as the definitive history of the genre."
—Publishers Weekly, starred review

"A lucid, jam-packed, richly illustrated companion to the Ken Burns documentary series... Country music is America's music—which is to say, music from every culture and ethnicity. An essential guide."
—Kirkus, starred review