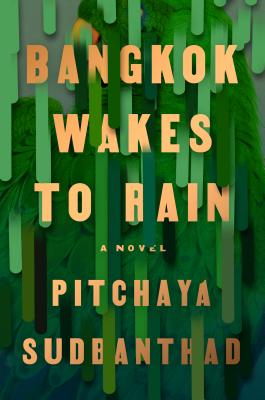 "Recreates the experience of living in Thailand's aqueous climate so viscerally that you can feel the water rising around your ankles." —Ron Charles, Washington Post

A missionary doctor pines for his native New England even as he succumbs to the vibrant chaos of nineteenth-century Siam. A post-World War II society woman marries, mothers, and holds court, little suspecting her solitary fate. A jazz pianist in the age of rock, haunted by his own ghosts, is summoned to appease the house's resident spirits. In the present, a young woman tries to outpace the long shadow of her political past. And in a New Krungthep yet to come, savvy teenagers row tourists past landmarks of the drowned old city they themselves do not remember. Time collapses as these lives collide and converge, linked by the forces voraciously making and remaking the amphibious, ever-morphing capital itself. Bangkok Wakes to Rain is an elegy for what time erases and a love song to all that persists, yearning, into the unknowable future.

Pitchaya Sudbanthad is the author of the novel Bangkok Wakes to Rain, published by Riverhead Books (US) and Sceptre (UK). He has received fellowships in fiction writing from the New York Foundation for the Arts and the MacDowell Colony, and currently splits time between Bangkok and Brooklyn.

Named a best book of 2019 by The New York Times, The Washington Post, Paste, and Kirkus.

“[An examination of] hidden, overlooked spaces, where ghosts and spirits and discarded dreams orbit, even as people try to outpace the past...[stories] intersect and build on one another, like banana leaves woven to make a floating offering for the water spirits . . . Bangkok is changing too fast, shedding layers of its history like the skins of a snake. Yet the city retains its allure, and the quest to return is like some animal.” —New York Times Book Review (Editor's Choice)

“Fluid in its structure and aqueous in its themes, the novel vividly evokes the teeming, sweltering city.” —The New Yorker

“Captures the nation’s lush history in all its turbulence and resilience … flowing gracefully from historical fiction to contemporary realism to science fiction … Entrancing. … Sudbanthad’s narrative is not just a tribute to his home, it’s an act of resistance against the city’s mildew and amnesia. … a way of preserving what is otherwise inscribed only on the liquid surface of memory.” —Washington Post

“Elegant and restrained  … A series of glancing vignettes that proceed in roughly linear fashion from the 19th century to the near future … bear witness to the city’s changing landscape. … Sudbanthad’s serene, almost otherworldy omniscience makes his fictional biography of the city an original and quietly memorable reading experience.” —Wall Street Journal

“Remarkable...Ambitious and sweeping, yet at once intimately crafted and shot through with fine detail, Bangkok Wakes to Rain is a sumptuous accomplishment.” —Esquire

“Expertly evokes a sense of place — [Sudbanthad's] descriptions of Thailand are gorgeous; the reader feels transported there. Bangkok Wakes to Rain is well worth reading. It's a strong debut from an intelligent, self-assured author.” —NPR

“A sweeping epic with the amphibious city of the title at its scintillating center…by turns realistic and mystical, historical and speculative, the book is beautifully diffuse…. Sudbanthad's elaborate, time-hopping saga explores class stratifications, intercultural connections and disconnections, and finely textured layers of history, all the while raising fascinating questions about the future.” —Minneapolis Star-Tribune

“Sudbanthad spans an entire century in his vast, illuminating portrait of Bangkok, bringing together a cast of characters as they experience love, revolution, and sorrow.” —Entertainment Weekly

“This prismatic debut peels back the layers of a Thai manse, whose past residents—among them a disillusioned American missionary and a world-weary jazz musician—still haunt its hallways metaphorically and literally.” —O, the Oprah Magazine

“[Sudbanthad’s] glittering tales of the title city accumulate into a mosaic of jagged puzzle pieces whose chronological leaps make the whole thing come together only more powerfully by the end.” —Vulture

“Bangkok Wakes to Rain is itself a sort of house of ghosts and those haunted by them, in a cycle of vivid life and aching loss... The technology Sudbanthad imagines is a marvel, but it’s one that might be modeled on what this novel does so beautifully: bringing a place and its people alive through story.” —Tampa Bay Times

“[W]ith its wide cast and still wider timeframes, Pitchaya Sudbanthad’s debut rewards close attention….Bangkok unifies his characters’ lives and, in a climate of concern for the city’s future, amid rising sea levels, so does water, with its fearsome power to transform, disrupt, slaughter and redeem….Sudbanthad’s blend of travelogue with social and political history is compelling in his treatment of expatriation….the ambitious structure pays off.” —Financial Times

“Gorgeously polyphonic and saturated in the senses, this novel brims with a wistful and gripping energy as it carries us through time and space. Sudbanthad brilliantly sounds the resonant pulse of the city in a wise and far-reaching meditation on home.” —Claire Vaye Watkins, author of Gold Fame Citrus and Battleborn

“[A] stunning novel, crafted with an entirely unique narrative structure… Sudbanthad is a remarkable talent, and I’m excited for readers to dive into a novel as rich, complex, and accomplished as Bangkok Wakes to Rain.” —Apogee

“[A] writer born in Thailand and now living in New York creates a portrait of Bangkok that sweeps across a century and a teeming cast of characters yet shines with exquisite detail. …This breathtakingly lovely novel is an accomplished debut, beautifully crafted and rich with history rendered in the most human terms.”  –Kirkus Reviews (starred)

“[I]n this assured debut, Sudbanthad provides a broad overview of Bangkok’s history while diving deep into individual stories of romance, revolution, and suffering…vivid stories that combine to create a resonant whole.” –Booklist

"A bold and tender novel with a simple, ingenious conceit --the stories a house can contain, from a city's colonial past to its antediluvian future. Sudbanthad arrives to us already a masterful innovator of the form—a startlingly original debut."
–Alexander Chee, author of The Queen of the Night

“Beautifully textured and rich with a sense of place, this is a big, ambitious book. Sudbanthad compellingly captures not only the long arcs of these lives but also the smallest moments, and how those moments linger in memory, how they haunt.”
–Karen Thompson Walker, author of The Age of Miracles and The Dreamers

“[M]editative…beautifully wrought…all of Sudbanthad’s characters live and breathe with authenticity, and his prose is deeply moving, making for an evocative debut.” –Publisher's Weekly