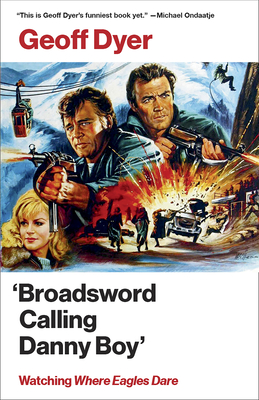 In Zona, Geoff Dyer—‘one of our most original writers’ (New York)—devoted a whole book to Andrei Tarkovsky’s cult masterpiece, Stalker. Now, in this warm and funny tribute to one of his favorite movies, he revisits the action classic Where Eagles Dare. A thrilling Alpine adventure headlined by a magnificent, bleary-eyed Richard Burton and a dynamically lethargic Clint Eastwood, Where Eagles Dare is the apex of 1960s war movies, by turns enjoyable and preposterous. ‘Broadsword Calling Danny Boy’ is Dyer’s hilarious tribute to a film he has loved since childhood: it’s a scene-by-scene analysis—or should that be send-up?—taking us from the movie’s snowy, Teutonic opening credits to its vertigo-inducing climax.

Geoff Dyer is the award-winning author of many books, including But Beautiful, Out of Sheer Rage, Zona (on Andrei Tarkovsky’s film Stalker), and the essay collection Otherwise Known as the Human Condition (winner of a National Book Critics Circle Award for criticism). A fellow of the Royal Society of Literature and a member of the American Academy of Arts and Sciences, Dyer lives in Los Angeles, where he is writer-in-residence at the University of Southern California. His books have been translated into twenty-four languages. www.geoffdyer.com

“The magpie eclecticism of Geoff Dyer is something to wonder at. His books are like party turns, each one different from the last while all bearing his distinctly puckish signature.” —Financial Times

“A short, eccentric, hugely enjoyable work that succeeds admirably in capturing the daft exuberance of Where Eagles Dare.’ —The Literary Review

“Dyer’s wry humour is everywhere evident. . . . ‘There is never a dull moment in Where
Eagles Dare,’ [Dyer] writes, and nor is there in this book.” —The Sunday Times (London)

“[Dyer is] funny and he’s a very good writer.” —The Times Literary Supplement

“An embarrassment of belly laughs. . . . It’s a sort of mash-up of mini-memoir and maxi-film-review. It is completely unjustifiable and delightfully apt. That’s its charm: it’s the strangest bird of a book you’re liable to take up anytime soon.” —Associated Press

“An erudite and amusing love song to a loved one.” —Kirkus Reviews

“Dyer is that rare breed of creative nonfiction writer who can take almost any topic (jazz, yoga, D. H. Lawrence) and make it his own. . . . This insightful, funny, and wildly enthusiastic book is essentially the literary version of live-tweeting a film.” —Booklist

“[A] freewheeling, rule-breaking, wholly original, scene-by-scene sprint through the crazy action film Where Eagles Dare. . . . I defy anyone not to laugh at Dyer’s description of Clint Eastwood’s talent for squinting.” —Craig Brown, Daily Mail

“A delightful celebration.” —The Irish Times

“Dyer is one of the most stylish writers alive. . . . [He] loved [Where Eagles Dare] as a child, but he doesn’t make the fatal sentimental mistake of worrying over the gap between that affection and what it feels like to see the film today. Instead he just drops right in and begins describing it. Like all of Dyer’s genres, it’s a deceptively difficult stunt to pull off—recreating what it’s like to watch a film in front of you, frame by frame.” —LitHub

“[A] funny and profound tribute . . . a book I wish I’d written myself.” —Aidan Scott, The Scotsman