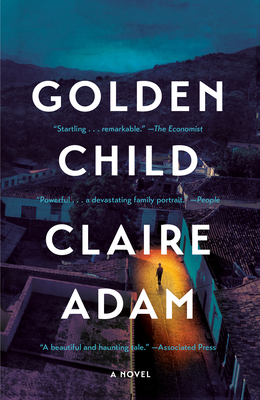 “The country of Trinidad, in all of its lush complexities and sociopolitical intricacies, is the real main character here. As a family struggles with the terrible news that their son has been kidnapped, the reader is treated to a tour of the sights, sounds, and smells of Port of Spain and the outlying countryside, in all of its corruption and glory. This lyrical first novel portends great things to come for Claire Adam.”
— Emily Crowe, An Unlikely Story, Plainville, MA

A deeply affecting debut novel set in Trinidad, following the lives of a family as they navigate impossible choices about scarcity, loyalty, and love

WINNER OF THE DESMOND ELLIOTT PRIZE • “Golden Child is a stunning novel written with force and beauty.  Though true to herself, Adam's work stands tall beside icons of her tradition like V.S. Naipaul.”—Jennifer Clement, author of Gun Love

Rural Trinidad: a brick house on stilts surrounded by bush; a family, quietly surviving, just trying to live a decent life. Clyde, the father, works long, exhausting shifts at the petroleum plant in southern Trinidad; Joy, his wife, looks after the home. Their two sons, thirteen years old, wake early every morning to travel to the capital, Port of Spain, for school. They are twins but nothing alike: Paul has always been considered odd, while Peter is widely believed to be a genius, destined for greatness.

When Paul goes walking in the bush one afternoon and doesn't come home, Clyde is forced to go looking for him, this child who has caused him endless trouble already, and who he has never really understood. And as the hours turn to days, and Clyde begins to understand Paul’s fate, his world shatters—leaving him faced with a decision no parent should ever have to make.

Like the Trinidadian landscape itself, Golden Child is both beautiful and unsettling, a resoundingly human story of aspiration, betrayal, and love.

“In fluid and uncluttered prose, Golden Child weaves an enveloping portrait of an insular social order in which the claustrophobic support of family and neighbors coexists with an omnipresent threat from the same corners.”—The New York Times Book Review

“[A] powerful debut . . . a devastating family portrait—and a fascinating window into Trinidadian society.”—People

“[An] emotionally potent debut novel . . . with a spare, evocative style, Adam (a Trinidad native) evokes the island’s complexity during the mid-'80s, when the novel is mostly set: the tenuous relationship between Hindus like Clyde’s family and the twins’ Catholic schoolmaster, assassinations and abductions hyped by lurid media headlines, resources that attract carpetbagging oil companies but leave the country largely impoverished.”—USA Today

Claire Adam was born and raised in Trinidad. She lives in London.

"Throughout this stunning portrait of Trinidad’s multicultural diversity, and one family’s sacrifices, soaring hopes and ultimate despair, Adam weaves a poetic lightness and beauty that will transfix readers."—Publishers Weekly (starred review)

"Adam's writing is luxuriant, evoking the atmospheric island setting and the complicated, worried lives lived under a near-constant sense of impending violence...Heartbreaking and lovely, this is an important work by a promising new voice."—Booklist (starred review)

"This book manages to combine two things rarely bound together in the same spine: a sensitive depiction of family life and the page-flicking urgency of a thriller."—The Guardian

"This is a tough, original novel of remarkable poise and confidence."—The Economist

"Golden Child is a beautiful and haunting tale, one that leaves readers thinking long after the last page has been turned."—Associated Press

"Golden Child is a stunning novel written with force and beauty.  Though true to herself, Adam's work stands tall beside icons of her tradition like V.S. Naipaul."—Jennifer Clement, author of Gun Love

“Golden Child swells with wisdom about masculinity, family, violence and sacrifice. I read it in a sitting, gripping the pages, nails chewed down by the final word. An intense, heart-breaking debut.”—Daniel Magariel, author of One of the Boys

“The characters in Golden Child are so completely real that I keep forgetting that their home is the page; they seem to breathe and think on their own. This is a devastating, wonderful book, and I can't help but wait impatiently for whatever Claire Adam writes next.” – Sara Taylor, author of The Lauras

“Utterly convincing, horrifying and, ultimately, intensely moving, it’s almost impossible to believe this small masterpiece is a first novel. Adam is a true and rare talent. I’m in awe.”—Julie Myerson, author of The Stopped Heart