My American Dream: A Life of Love, Family, and Food (Large Print / Paperback) 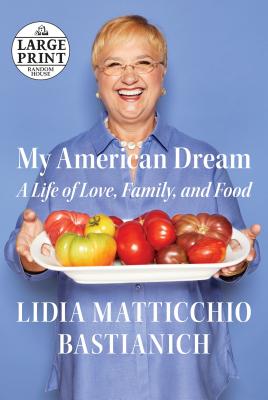 By Lidia Matticchio Bastianich
$31.00
Backordered. Place an order and we will let you know when to expect your book.

Lidia Matticchio Bastianich is an Emmy Award–winning Public Television host and best-selling author of eleven cookbooks and three children’s books. She is the chef/owner of four acclaimed New York City restaurants—Felidia, Becco, Esca, and Del Posto. With her daughter, Tanya Bastianich Manuali, she operates Lidia’s Pittsburgh and Lidia’s Kansas City. She runs Becco, Esca and Del Posto with her son, Joe Bastianich. She opened Eataly, the largest artisanal Italian food and wine marketplace, in New York City, Chicago, Boston, Los Angeles, and São Paulo, Brazil, with Joe and others. She is also, with Tanya, co-founder and president of Tavola Productions and has her own pasta and sauce line sold nationwide. www.lidiasitaly.com