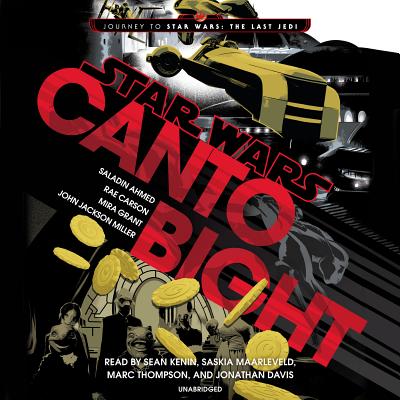 Soon to be seen in Star Wars: The Last Jedi, welcome to the casino city of Canto Bight. A place where exotic aliens, captivating creatures, and other would-be high rollers are willing to risk everything to make their fortunes. Set across one fateful evening, these four original novellas explore the deception and danger of the lavish casino city.

• An honest salesman meets a career criminal as a dream vacation turns into the worst nightmare imaginable, in a story by Saladin Ahmed.

• Dreams and schemes collide when a deal over a priceless bottle of wine becomes a struggle for survival, as told by Mira Grant.

• Old habits die hard when a servant is forced into a mad struggle for power among Canto Bight’s elite, in a tale by Rae Carson

• A deadbeat gambler has one last chance to turn his luck around; all he has to do is survive one wild night, as told by John Jackson Miller.

In Canto Bight, one is free to revel in excess, untouched from the problems of a galaxy once again descending into chaos and war. Dreams can become reality, but the stakes have never been higher—for there is a darkness obscured by all the glamour and luxury.


Audiobook Table of Contents:
Rules of the Game by Saladin Ahmed, read by Sean Kenin (CD 1 to CD 2)
The Wine in Dreams by Mira Grant, read by Saskia Maarleveld (CD 2 to CD 4)
Hear Nothing, See Nothing, Say Nothing by Rae Carson, read by Marc Thompson (CD 4 to CD 7)
The Ride by John Jackson Miller, read by Jonathan Davis (CD 7 to CD 9)

Saladin Ahmed was born in Detroit and raised in a working-class Arab American enclave in Dearborn, Michigan. His short stories have been nominated for the Nebula and Campbell awards, have appeared in Year’s Best Fantasy and numerous magazines, anthologies, and podcasts, and have been translated into five foreign languages. His first novel was Throne of the Crescent Moon. He lives near Detroit with his wife and their twin children.

Rae Carson is the author of the bestselling and award-winning Girl of Fire and Thorns series. Her books tend to contain adventure, magic, and smart girls who make (mostly) smart choices. Originally from California, she now lives in Arizona with her husband.

John Jackson Miller is the New York Times bestselling author of Star Wars: Kenobi, Star Wars: A New Dawn, Star Wars: Lost Tribe of the Sith, and the Star Wars Legends: The Old Republic graphic novel collections from Marvel, among many other novels and comics. A comics industry analyst, he lives in Wisconsin with his wife, their two children, and far too many comic books.