In Sunlight And In Shadow (Paperback) 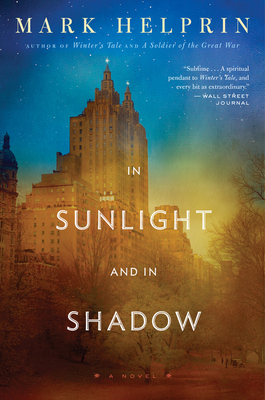 “This magnificent, sweeping story, set in post-WWII Manhattan, took my breath away. I was torn between racing along the swift river of the narrative and needing to pause to drink in luminous sentences and searing paragraphs. The author feeds the soul of the reader as he describes the depths of mind, heart, and spirit of characters whose lives have been shaped by the war, the culture, and the city. A deeply romantic and supremely intelligent novel.”
— Karen Frank, Northshire Bookstore, Manchester Center, VT

An epic love story set in post-war New York, by the best-selling author of Winter's Tale.

In the summer of 1946, New York City pulses with energy. Harry Copeland, a World War II veteran, has returned home to run the family business. Yet his life is upended by a single encounter with the young singer and heiress Catherine Thomas Hale, as each falls for the other in an instant.

They pursue one another in a romance played out in Broadway theaters, Long Island mansions, the offices of financiers, and the haunts of gangsters. Catherine’s choice of Harry over her longtime fiancé endangers Harry’s livelihood and threatens his life.

In the end, Harry must summon the strength of his wartime experience to fight for Catherine, and risk everything.

“In its storytelling heft, its moral rectitude, the solemn magnificence of its writing and the splendor of its hymns to New York City, [In Sunlight and in Shadow] is a spiritual pendant to Winter’s Tale and every bit as extraordinary...Even the most stubbornly resistant readers will soon be disarmed by the nobility of the novel’s sentiments and seduced by the pure music of its prose.”??—??Wall Street Journal

MARK HELPRIN is the acclaimed author of Winter's Tale, A Soldier of the Great War, Freddy and Fredericka, The Pacific, Ellis Island, Memoir from Antproof Case, and numerous other works. His novels are read around the world, translated into over twenty languages.

"In its storytelling heft, its moral rectitude, the solemn magnificence of its writing and the splendor of its hymns to New York City, the new novel is a spiritual pendant to "Winter's Tale," and every bit as extraordinary...Even the most stubbornly resistant readers will soon be disarmed by the nobility of the novel's sentiments and seduced by the pure music of its prose...The harmonization of the dual climaxes results in passages so gorgeous and stirring that I was moved to read them out loud. That is fitting, because the writing throughout "In Sunlight and in Shadow" sounds as though it were scored to some great choral symphony. Harry himself says it best: "My view is that literature should move beyond opinion, where music already is, and old age, if we're lucky, may lead." -- Sam Sacks, The Wall Street Journal "Helprin has written another expansive novel, as if no one has yet alerted him that the novel is dead. Here it is, a poetic and likely enduring rendering of New York just after the Second World War, a love story that pines for love but even more fervently for an industrious and ascendant America that is no more and maybe never was.…In Sunlight and In Shadow matters. It is a novel, with all of the presumption and ambition and sense of transport that that word once carried when it was the boss…If his latest novel is a book out of time, perhaps it holds clues as to where the novel ought to go from here." --Mark Warren, Esquire "New York, New York, it's a wonderful town! And Mark Helprin's new near-epic novel makes it all the more marvelous. It's got great polarized motifs — war and peace, heroism and cowardice, crime and civility, pleasure and business, love and hate, bias and acceptance — which the gifted novelist weaves into a grand, old-fashioned romance, a New York love story...Helprin does several things extraordinarily well: He fights for and wins our close sympathy for his characters, even as he delivers a full-throated rendering of life at war and life at peace (with a little of each in the other). He also pays wonderful attention to the natural world, such as that New York spring that opens the story, the changing of seasons, dawn in France and winter in Germany during the war, such domestic matters as 30 minutes of kisses, and the rue and wonder of a great love affair. I was desperately disappointed, though, by the end of this grandly charming and deeply affecting novel — but only because it ended." -- Alan Cheuse, NPR "Helprin’s delightful new novel is a 705-page mash note to Manhattan in the years immediately following World War II. Like Winter’s Tale, the 1983 bestseller that made his name, it’s a paean to women and their beauty – and above all to romantic love and its abiding power…Helprin paints a dazzling portrait of the city during a particular moment in history and evokes the universal, dizzy delight of falling head over heels in love…Wise, saturated with sensory detail and beautifully written, Sunlight celebrates the unquenchable bliss of existence." -- Robin Micheli, People Magazine "Passionate, earnest, nostalgic, and romantic…Throughout the novel he splashes down paeans to virtue and beauty you’d have to be heartless not to enjoy…" -- Liesl Schillinger, The New York Times Book Review "What I’ve read so far is glorious and golden, truly like reentering another world where another sensibility prevails and even the sunlight and shadow have a different weight; the 100,000-copy first printing seems right." -- Barbara Hoffert, Library Journal Pre-pub Alert "IN SUNLIGHT AND IN SHADOW is every bit as terrific as you may have heard." -- Michael Cader in Publishers Lunch "A fine adult love story—not in the prurient sense, but in the sense of lovers elevated from smittenness to