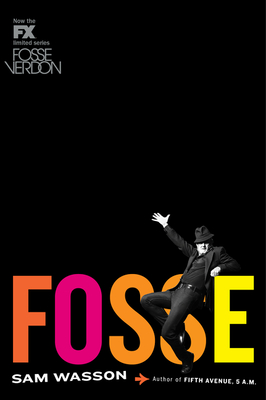 “Wasson is a smart and savvy reporter, and his book abounds with colorful firsthand tales.” — Janet Maslin, New York Times

The only person ever to win Oscar, Emmy, and Tony awards in the same year, Bob Fosse revolutionized nearly every facet of American entertainment. His signature style would influence generations of performing artists. Yet in spite of Fosse’s innumerable—including Cabaret, Pippin, All That Jazz, and Chicago, one of the longest-running Broadway musicals ever—his offstage life was shadowed by deep wounds and insatiable appetites.

To craft this richly detailed account, best-selling author Sam Wasson has drawn on a wealth of unpublished material and hundreds of sources: friends, enemies, lovers, and collaborators, many of them speaking publicly about Fosse for the first time. With propulsive energy and stylish prose, Fosse is the definitive biography of one of Broadway and Hollywood’s most complex and dynamic icons.

SAM WASSON is the author of five books including the best-selling Fosse and Fifth Avenue, 5 AM: Audrey Hepburn, Breakfast at Tiffany’s, and the Dawn of the Modern Woman. He lives in Los Angeles.

Chicago Tribune Best Books of 2013
Publisher’s Weekly Best Books of 2013
NPR’s Best Books of 2013
Los Angeles Times Best Seller
Entertainment Weekly’s Top 10 Books of 2013
Newsday’s Top 10 Books of 2013
Los Angeles Public Library Best Non-Fiction Books of 2013
Kirkus Best Non-Fiction Books of 2013 "Mr. Wasson is a smart and savvy reporter, and his book abounds with colorful firsthand tales—required reading for anyone eager to understand his brand of — to use a term that appears here constantly, and can’t be outdone — razzle-dazzle."
—Janet Maslin, New York Times "Fascinating and exhaustive biography...Mr. Wasson has taken complete control of his subject."
—Wall Street Journal ''He thought he was the best, and he thought he was terrible.'' The man in question is legendary choreographer and director Bob Fosse, whose celebrated life and career get their due in Sam Wasson's spellbinding 695-page biography, Fosse. You don't need to be a Broadway expert to enjoy this portrait of a man whose rise to power was famously fueled by insecurity. It's all here: accounts of his monstrous, masterful directing style; the explosive personal battles behind his Tony-winning triumphs; his incendiary relationship with Gwen Verdon. Wasson simply doesn't miss a thing. Give the guy a (jazz) hand. A-"
—Entertainment Weekly "Impeccably researched."
—Vanity Fair "The only thing that could have been better than Sam Wasson's page-turning, comprehensively rendered biography of choreographer-director Bob Fosse would have been Fosse's own memoir...Wasson's own narrative style has a jazzy, discursive and relentless energy well aligned with its subject."
—USA Today "Thorough and lively biography."
—New Yorker, Briefly Noted "Amazingly well-written."
—New York Journal of Books "Unlike countless biographies of artists and performers, "Fosse" does not rely on dime-store psychoanalysis in explicating its subject and his flaws...Wasson, so skilled at providing a macro overview -- he seamlessly outlines the history of both the American stage and the American movie musical to better foreground Fosse's transformations of each -- has also written a book filled with dazzling aperçus."
—Newsday "Wasson's biography is richly researched and passionate, and while Fosse's film pursuits are only a part of the story, his life had a cinematic sweep."
—The Philadelphia Inquirer "The reason I picked up Fosse, though, has as much to do with its author as with its subject. . . . Wasson is a canny chronicler of old Hollywood and its outsize personalities. (The cast of characters is enough to recommend the book: Audrey Hepburn, Truman Capote, Henry Mancini, Edith Head.) More than that, he understands that style matters, and, like his subjects, he has a flair for it."
—New Yorker "Definitive."
—Hollywood Reporter "Scintillating . . . There's an enormous amount of scholarship here, yet the story never drags, so adroitly does [Wasson] blend his material into a fluent narrative around evocative scenes where character emerges novelistically."
—Publishers Weekly (starred review) "Here's something you can't say about many celebrity biographies: at nearly 750 pages, it feels like it ends too soon . . . A pure joy to read, cover to cover."
—Booklist "Lushly researched . . . [Wasson] has amassed a mountain of data about Fosse but has sculpted it into something moving and memorable. . . . Graceful prose creates a richly detailed and poignant p —