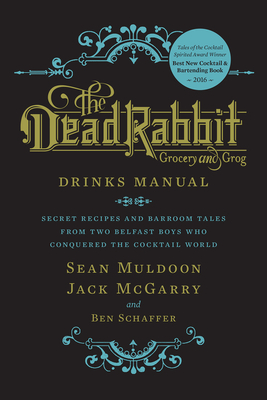 Dead Rabbit Grocery & Grog in Lower Manhattan has dominated the bar industry, receiving award after award including World's Best Bar, World’s Best Cocktail Menu, World’s Best Drink Selection, and Best American Cocktail Bar. Now, the critically acclaimed bar has its first cocktail book, The Dead Rabbit Drinks Manual, which, along with its inventive recipes, also details founder Sean Muldoon and bar manager Jack McGarry’s inspiring rags-to-riches story that began in Ireland and has brought them to the top of the cocktail world. Like the bar’s décor, Dead Rabbit’s award-winning drinks are a nod to the “Gangs of New York” era. They range from fizzes to cobblers to toddies, each with its own historical inspiration. There are also recipes for communal punches as well as an entire chapter on absinthe. Along with the recipes and their photos, this stylish and handsome book includes photographs from the bar itself so readers are able to take a peek into the classic world of Dead Rabbit.

In his role as bar manager at both the Dead Rabbit and the Merchant Hotel, JACK McGARRY became internationally known for his extensive historically-based beverage programs. For each project, Jack thoroughly tested thousands of recipes from scores of cocktail books from the mid-nineteenth century, which sometimes involved making 50 to 70 versions of a single drink before one was deemed the best. In July 2013, Jack was honored with the prestigious Tales of the Cocktail "International Bartender of the Year" award, making him the youngest-ever recipient and only the second in America.

BEN SCHAFFER has been “the voice” of the Dead Rabbit since even before its launch, writing all its promotional materials, including advertising, website, and social media. In November 2012, Ben co-founded the consulting firm The Best Bar in the World with Sean Muldoon and Jack McGarry to offer their hospitality expertise worldwide. Based in New York City, he works as a writer, creative director, and consultant for companies in many industries, including beverages, finance, and the not-for-profit sector.

Winner, Tales of the Cocktail Spirited Award 2016 -- Best New Cocktail & Bartending Book   "Long before they had a place to hang a sign, Sean Muldoon and Jack McGarry, barmen from Belfast, Northern Ireland, had the name for their bar in Lower Manhattan: the Dead Rabbit. And in their new book, the story of these two men, who have become admired cocktail-makers, makes a good read. So do the recipes and their lively explanations."  --The New York Times   "If you like your cocktails classic and with a side of old timey New York City swagger, this is the cocktail book for you."   --Epicurious   "For anyone interested in cocktail culture, it's a fascinating read."  --Tasting Table   "Tells the story of how the bar came to be, and the drinks that make this place so special."   --The Kitchn   “Enduring change, or legacy for that matter, is only possible when the existing order in its entirety is taken into consideration before adaptations are made. And here we have it. In concept and execution, The Dead Rabbit Drinks Manual, which chronicles the stewardship of Sean Muldoon and creativity of Jack McGarry, is a peerless, over-the-shoulder case study in how history is used to make history; with twists and turns in the modern plot nimbly portrayed by Ben Schaffer that recall the turbulent times of the bar’s brazen namesake.” —Jim Meehan, author of The PDT Cocktail Book     “Sean and Jack have created a ‘hundred year bar’ they call The Dead Rabbit Grocery and Grog; their quest to be the best has gifted New York with these rooms of endless delight. Once before in the last century two partners, Jack and Charlie, made a similar kind of magic at 21 West 52nd Street, still open and just a half-dozen years shy of a hundred years. Pick up The Dead Rabbit Drinks Manual and find out what makes a ‘hundred year bar.’ ” —Dale DeGroff, author of The Craft of the Cocktail     “If ever a cocktail book was a grimoire of occult potionology, it’s this one. Sean Muldoon’s fierce determination to excel and Jack McGarry’s intensely focused artistry of the bar shine through in every recipe here, be it for one of The Rabbit’s characteristic virtuoso riffs on the classics or for one of its sublime originals.” —David Wondrich, author of Imbibe and Punch —