The Secret Lives of Bats: My Adventures with the World's Most Misunderstood Mammals (Hardcover) 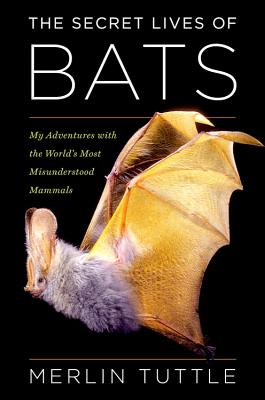 By Merlin Tuttle
Unavailable. Orders will be auto-cancelled.

Books will ship to arrive on or immediately after the October 20th on sale date.

Thank you for supporting a local author and a local independent bookstore!

A lifetime of adventures with bats around the world reveals why these special and imperiled creatures should be protected rather than feared.

From menacing moonshiners and armed bandits to charging elephants and man-eating tigers, Merlin Tuttle has stopped at nothing to find and protect bats on every continent they inhabit. Enamored of bats ever since discovering a colony in a cave as a boy, Tuttle saw how effective photography could be in persuading people not to fear bats, and he has spent his career traveling the world to document them.

Few people realize how sophisticated and intelligent bats are. Tuttle shares research showing that frog-eating bats can identify frogs by their calls, that vampire bats have a social order similar to that of primates, and that bats have remarkable memories. Bats also provide enormous benefits by eating crop pests, pollinating plants, and carrying seeds needed for reforestation. They save farmers billions of dollars annually and are essential to a healthy planet.

Sharing highlights from a lifetime of adventure and discovery, Tuttle takes us to the frontiers of bat research and conservation and forever changes the way we see these poorly understood yet fascinating creatures.

Dr. MERLIN TUTTLE is an ecologist, wildlife photographer, and conservationist who has studied bats worldwide for more than fifty years. He founded Bat Conservation International in 1982. His work has been featured in Science, the Wall Street Journal, The New Yorker, and National Geographic.

Bats are "sophisticated, beautiful, even cute, quite aside from their crucial roles as primary predators of insects, pollinators of flowers and dispersers as seeds," writes Tuttle, an ecologist who has championed their cause for more than 50 years. The author's cover stories and photographs have been featured in National Geographic and other magazines, and he has traveled the globe to study bats in their natural cave habitats, risking his life in the process. After obtaining a doctorate in bat biology, Tuttle worked as the curator of the Milwaukee Public Museum. In 1982, he resigned and founded the advocacy organization Bat Conservation International to enlist support for these much-maligned mammals that are in danger of becoming an endangered species. Bats are wrongly accused of destroying crops and spreading diseases such as rabies, and they are confused with their mythical blood-sucking namesakes. Tuttle sets the record straight, showing the important role bats play in pest control and their potential boom for farmers. "A single bat could catch thousands of insects in just one hour," he writes. "Bats ha[ve] a far better record of living safely with humans than even our beloved dogs, and…they also play essential roles in supporting human economies." Using implanted microchips to track their behavior, scientists have established that certain bats are comparable to elephants in their ability to maintain complex social relationships. They have highly sophisticated hunting practices and are altruistic within their groups. Tuttle notes that it is not unusual to find as many as 100,000 bats clustered together hibernating. His fascination with them began when he was 12 and he observed them in a cave near his Tennessee home. Encouraged by his father, who was a botanist, he explored the local caves where bats hibernated and studied their migratory behavior. Tuttle's recent attempts to photograph them in their natural habitat have led him through many hair-raising adventures, which he entertainingly chronicles. A page-turning memoir of curiosity about—and dedication to—a significant part of the natural world.--Kirkus Reviews