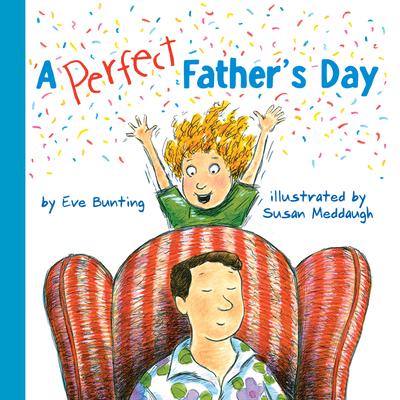 “An engaging family portrait and a winning tribute to ‘Dad.’” —School Library Journal   Four-year-old Susie gives her dad her idea of the perfect Father’s Day: A fast food restaurant for lunch, feeding birds at the park, a ride on the carousel, the swings . . . they even top their day off with balloons! Eve Bunting’s tongue-in-cheek story is sure to resonate with the loving, exhausted parents of charming preschoolers. Susan Meddaugh contributes ample subtle humor to the reading experience in the details of her illustrations. This sweet treat of a book, in a new paper-over-board gift edition with foil cover accents, is the perfect story for dads and kids to share on a perfect Father’s Day.

Eve Bunting has written over two hundred books for children, including the Caldecott Medal-winning Smoky Night, illustrated by David Diaz, The Wall, Fly Away Home, and Train to Somewhere. She lives in Southern California.

Susan Meddaugh worked at a publishing company for ten years, first as a designer, then art editor, and finally as art director before striking out on her own as a freelance illustrator and creator of children's books. Susan has written and illustrated many popular books for children, including Martha Speaks, which was chosen as a New York Times Best Illustrated Book for 1992. Her Martha Speaks book series was adapted into an award-winning PBS Kids TV show. She lives in Sherborn, Massachusetts.

James Cross Giblin (1933-2016) was the author of more than twenty critically acclaimed books for young people. His book The Life and Death of Adolf Hitler received the Robert F. Sibert Award for Informational Books.

"It's Father's Day, and four-year-old Susie has planned a perfect outing with all the things she knows her dad will like the best. . . . Bunting's simple, witty text sketches a warm father-daughter relationship and affectionately glances at the four-year-old mind at work. Meddaugh's bright watercolors and pencil illustrations add to the humor as they show the two enjoying the day but with clearly differing levels of energy and points of view." Booklist, ALA

"Clearly the perfect Father's Day requires the perfect father, and Susie's parent quite literally takes the cake. Meddaugh's balloon-colored cartoons are perfectly tuned to the spirit of the day. With more spontaneity than most made-to-order picture books, this is an engaging family portrait and a winning tribute to 'Dad.'" School Library Journal —