Good as Gone: A Novel of Suspense (Hardcover) 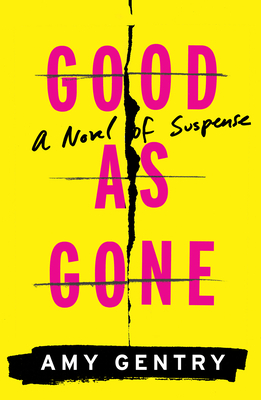 By Amy Gentry
Unavailable. Orders will be auto-cancelled.

*Please note* Online sales for signed copies of this title will end at 4pm CST Thursday, July 28th. Orders for signed/personalized books that come in after this time cannot be guaranteed. Online sales for signed books will resume at 9am CST Friday, July 29th. This title will be available for purchase in the store before and during the signing event. After the event, signed books will be available on a first come, first served basis while supplies last!

Thirteen-year-old Julie Whitaker was kidnapped from her bedroom in the middle of the night, witnessed only by her younger sister. Her family was shattered, but managed to stick together, hoping against hope that Julie is still alive. And then one night: the doorbell rings. A young woman who appears to be Julie is finally, miraculously, home safe. The family is ecstatic—but Anna, Julie’s mother, has whispers of doubts.  She hates to face them. She cannot avoid them. When she is contacted by a former detective turned private eye, she begins a torturous search for the truth about the woman she desperately hopes is her daughter.

Propulsive and suspenseful, Good as Gone will appeal to fans of Gone Girl and The Girl on the Train, and keep readers guessing until the final pages.

"[One] of the most anticipated summer thrillers...Gentry's novel isn't primarily about the version of the self that comes from a name and a family of origin; instead, it draws our attention to the self that's forged from sheer survival, and from the clarifying call to vengeance." —The New York Times Book Review

"Gentry’s debut novel is more than worthy of the analogy [to Gillian Flynn’s 2012 smash, Gone Girl]…it’s so gripping you might start to question your own family’s past." —Entertainment Weekly

"So much about this novel is fresh and insightful and decidedly not like every other thriller…Good as Gone ranks as an outstanding debut, well worth reading. This is no mere Gone Girl wannabe.” —The Dallas Morning News

“A mother, a daughter, a zealot, an investigator, a family, a stripper, and more than a few survivors lay the riveting groundwork, but it's Amy Gentry's realistic portrayals of victims and their families that set Good as Gone apart from other page-turning crime dramas...The end result is a true ‘novel of suspense’: a book that's hard to put down not only because of our investment in the plot, but also because of our investment in the lives of the complicated characters.” —The Austin Chronicle

"This smart, crisply written thriller begins with a ‘ripped from the headlines’ premise, but broadens to explore themes ranging from the mothering of daughters to the inwardness of suburban life and the lure of the megachurch in an era of consumerism.” —The Minneapolis Star Tribune

“Both a mother-daughter and a family-under-fire story, Good as Gone is laden with confused identities and a thrumming plot. Amy Gentry's debut also holds a mirror up to the myriad ways rape culture is perpetuated.” —Bustle

“Good as Gone…confirms the entrance of a powerful new voice in the world of crime fiction—Gentry knows crime fiction as a critic and as a writer, and brings her experiences with her for a novel that is as playful and self-aware in its structure as it is responsible in its themes.”—MysteryPeople

"If you love a measured and thought-provoking novel of suspense, with one eye on character study and one eye on a city’s conflicted culture, this might just be the next book for you.”  —Crime by the Book

"Clever perspective changes give Gentry's debut building suspense...Fans of Paula Hawkin's The Girl on the Train will enjoy the shifting points of view and the complex female characters, and those who liked Samantha Hunt's Mr. Splitfoot will appreciate the seedy characters and haunting theme of childhood vulnerability...Gentry's depiction of a family working through immense suffering will connect with many readers." —Booklist

"Gentry’s treatment is effective, with a swift-moving narrative and an interesting backstory for Julie and engrossing insight into Anna’s ambivalence and grief...A good pick for fans of mysteries, thrillers, and family drama." —Library Journal

“Amy Gentry has burst out of the gate with a monumentally intelligent, wily thriller about identity, vengeance, and homecoming that introduces readers to some of the most badass female characters on the shelf. Good as Gone is a river that shoots the reader deftly through rapids, over cliffs, past eerie vistas to a shocking, elegant and well-earned ending. Do yourself a favor: jump in.“—Kelly Luce, author of Pull Me Under

“A bracing, scarily honest look at what it means to be female—and to be a daughter, sister, wife, mother—wrapped up in a vicious thriller. Gentry's ambitious debut will satisfy fans of Gone Girl, The Girl With the Dragon Tattoo, and The Killing.”—Merritt Tierce, author of Love Me Back

“Unreliability sets the tone for this page-turner as it begins with a kidnapping where the only witness is the victim's a ten-year-old sister. Pitting innocence and earnestness against criminality and manipulation, this novel, with its deft twists and turns, will leave you haunted long after the final page...You need to read this book. Like a literary James Patterson, this is a not-to-miss debut.”—Steph Opitz, book reviewer, Marie Claire