The Fuzzy and the Techie: Why the Liberal Arts Will Rule the Digital World (Hardcover) 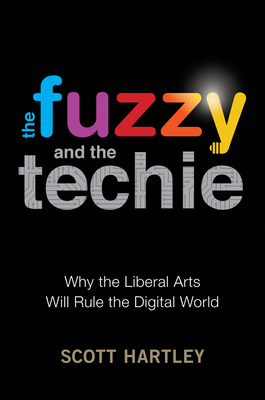 By Scott Hartley
Unavailable. Orders will be auto-cancelled.

Scott Hartley first heard the terms fuzzy and techie while studying political science at Stanford University. If you majored in the humanities or social sciences, you were a fuzzy. If you majored in the computer sciences, you were a techie. This informal division has quietly found its way into a default assumption that has misled the business world for decades: that it's the techies who drive innovation.

But in this brilliantly contrarian book, Hartley reveals the counterintuitive reality of business today: it's actually the fuzzies - not the techies - who are playing the key roles in developing the most creative and successful new business ideas. They are often the ones who understand the life issues that need solving and offer the best approaches for doing so. It is they who are bringing context to code, and ethics to algorithms.They also bring the management and communication skills, the soft skills that are so vital to spurring growth.

Hartley looks inside some of today's most dynamic new companies, reveals breakthrough fuzzy-techie collaborations, and explores how such collaborations are at the center of innovation in business, education, and government, and why liberal arts are still relevant in our techie world.

SCOTT HARTLEY is a venture capitalist and startup advisor. He has served as a Presidential Innovation Fellow at the White House, a partner at Mohr Davidow Ventures, and a venture partner at Metamorphic Ventures. Prior to venture capital, Hartley worked at Google, Facebook, and Harvard's Berkman Center for Internet & Society. He is a contributing author to the MIT Press book Shopping for Good, and has written for publications such as Inc., Foreign Policy, Forbes, and the Boston Review.

Hartley has been a speaker at dozens of international entrepreneurship events with the World Bank, MIT, Google, and the U.S. State Department’s Global Innovation in Science and Technology (GIST) program. Hartley holds an MBA and an MA from Columbia University, and a BA from Stanford University. He is a term member at the Council on Foreign Relations and lives in Brooklyn, New York.

Cited by CNN’s Fareed Zakaria in his 2017 commencement address to Bucknell University (http://www.bucknell.edu/news-and-media/events-and-calendars/commencement/photos-speeches-and-videos/commencement-speeches/commencement-2017-fareed-zakaria-address.html )

“You can't build a wall to keep the robots out. That doesn’t mean we’re doomed. Scott Hartley does a masterful job going beyond the headlines to explain why the future needs engineers as much as it does philosophers, and why the two need each other.” — Ian Bremmer, President of Eurasia Group and author of Superpower.

"This terrific book clearly articulates the importance of the liberal arts in our technocentric world, a view I have long supported. In the end, technology is about making the lives of humans better, and, as the author argues, it is the humanities and social sciences that teach us about the human condition and how it might be improved. A delightful read!" — John Hennessy, Chairman of Google, Inc. and President Emeritus of Stanford University

"Scott Hartley artfully explains why it is time for us to get over the false division between the human and the technical. If received and acted upon with the seriousness it deserves we can anticipate real benefits for business and society." — Tim Brown, CEO of IDEO and author of Change By Design

"For fuzzy creatives everywhere, this book is both a tonic and a manifesto. As we enter the age of artificial intelligence, we will need more and more of the human kind, nurtured not by the sciences but the humanities. A compelling and convincing read!" -- Anne-Marie Slaughter, President and CEO of New America

“Scott Hartley’s timely and thought-provoking book is a refreshing and important voice in the era of major technological transformation and advances in our world, led by Big Data, AI, Cloud, genomics, etc. As Nature has evolved our brain to be capable of logical reasoning as well as emotional feelings, artistic expressions and remarkable intuitions, human civilization has always evolved and benefited from the co-evolution of arts, literature, engineering and sciences. Humanity has begun the era of intelligent machines and genomic wonder tools. It has become more urgent and imperative that humanistic thinking and values can help guide the way technologies are designed, experimented, deployed and communicated. From digital humanities to humanistic technologies, human wisdom should be all in when it comes to designing and defining our collective future. Students, parents, educators, policy makers, CEOs and entrepreneurs should all read this book.” —Professor Fei-Fei Li, Director of Stanford Artificial Intelligence Lab

"For generations, leadership has been viewed as an art form, refined and perfected by a healthy dose of "fuzzy" liberal arts education. But in the tech-heavy world of the 21st Century, traditional leadership preparation needs to be leavened by STEM. As Scott Hartley brilliantly illustrates, a "fuzzy-tech" partnership is a prerequisite -- not just as a guide for governments and businesses in meeting existential challenges, but also as a foundation for emerging leaders; they, not machines, will be the keys to solving the greatest problems of the new century."  — Daniel W. Christman, Lieutenant General (Retired) 55th Superintendent, U.S. Military Academy, West Point

“Great book for all.  Blows up the false dichotomy in education between tech and liberal arts. This book shows that not only can both co-exist; it is dangerous if they don’t both exist side by side in an integrated manner. They make each other more effective. Scott has done an excellent job of making his argument with facts, illustrative case studies and well-reasoned solutions. An important and enjoyable read.” — Bill Aulet, author of Disciplined Entrepreneurship and Managing Director of the Martin Trust Center for MIT Entrepreneurship

"Silicon Valley is founded on strong engineering cultures, but the biggest challenges of the coming decades will lead Silicon Valley to partner with those who best understand our humanity. Many of the greatest companies are built by fuzzies and techies working together — Scott makes a compelling case that important data and information are increasingly generated by machines, but the wisdom of humans is required to build this data into the knowledge that runs our civilization.” — Joe Lonsdale, Co-Founder of Palantir

"In this book Scott Hartley succeeds better than anyone I know in articulating the indispensable role a liberal arts education plays… One of the impacts of technology has been to democratize freedom scholarship and passion. Scott Hartley lays this out in plain language that a liberal arts education trumps early specialization in STEM subjects.” — Temba Maqubela, Headmaster, Groton School

“I am a “fuzzy” venture capitalist who owes a successful life in Silicon Valley to the “techies”.  Scott Hartley has brilliantly described the magic that is created when these two tribes work together.  His insightful book shines a bright light on this rarely analyzed but highly productive relationship.” — Bill Draper, Co-Chair of the Draper Richards Kaplan Foundation and author of The Startup Game: Inside the Partnership Between Venture Capitalists and Entrepreneurs

"A bouncy read by the venture capitalist that suggests sociology and philosophy graduates might be the real winners of the robot revolution. As tech start-ups and websites can be built by putting 'chunks' of other peoples’ work and automated processes together, [Hartley] argues, 'techies' could be put out of business. Those 'fuzzies' who studied the liberal arts — with their creative skills and broad understanding of communication techniques and ideas — may well populate Silicon Valley C-suites in far greater numbers in the future. According to Hartley, change is already under way, with many successful start-ups in the tech industry now being established by fuzzies." - Financial Times, "Business Books of the Month"