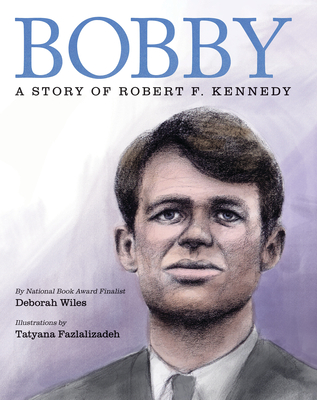 Americans claimed Robert Kennedy as one of their own. They called him Bobby.

Bobby is set in 1968, with a grandfather telling his grandchild about Kennedy's life. Bobby was the younger brother of President John F. Kennedy. He became an accomplished public servant and activist in his own right. Though his run for presidency was tragically cut short on June 5, 1968, Bobby proved the value of empathy and grit. The story concludes as his funeral train makes its solemn journey from New York to Washington, DC.

Kennedy was perceived by many to be a rare unifying force in American politics. He was beloved by Americans of all races for his integrity and devotion to the civil rights cause. His life continues to inspire efforts for social change.

Deborah Wiles's Bobby will illuminate the importance of Robert Kennedy's life for children, parents, teachers, and librarians. Informative back matter is included.

Tatyana Fazlalizadeh is a Black/Iranian visual artist and Oklahoma City native. She is a painter whose work ranges from the gallery to the streets, using visual art to address the daily oppressive experiences of marginalized people through beautifully drawn and painted portraits. Her street art series, "Stop Telling Women to Smile," addressing sexual harassment in public spaces, can be found on walls across the globe. In 2019, she was the inaugural Public Artist in Residence for the New York City Commission on Human Rights. Fazlalizadeh has been profiled by the New York Times, NPR, MSNBC, the New Yorker, and Time Magazine. She has lectured at the Smithsonian National Museum of African American History and Culture, the Brooklyn Museum, New Orleans Contemporary Arts Center, and several universities including Stanford, Brown, USC, and Pratt Institute. Fazlalizadeh’s work can be seen on Spike Lee's Netflix series, She's Gotta Have It, for which she is also served as the show's art consultant. In 2020, Tatyana's debut book Stop Telling Women to Smile: Stories of Street Harassment and How We're Taking Back Our Power released from Seal Press. She is based in Brooklyn, NY.
Deborah Wiles is the author of the picture book Freedom Summer and the novels: Love, Ruby Lavender; The Aurora County All-Stars; Each Little Bird That Sings, a National Book Award finalist; and A Long Line of Cakes. She is also the author of the documentary novels Countdown; Revolution, a National Book Award Finalist; and Anthem. She has vivid memories of ducking and covering under her school desk during air raid drills at the time of the Cuban Missile Crisis. She also sang in the Glee Club, was a champion speller, and hated Field Day. Deborah lives in Atlanta, Georgia. You can visit her on the web at deborahwiles.com.

★ "Wiles (the Sixties Trilogy) manages to cover all the outward milestones while making the heart of the book Kennedy's growth as a human being; her account, suffused with compassion, respect, and melancholy, communicates all that was lost with RFK's assassination. Fazlalizadeh's soft, textured illustrations, in graphite and colored digitally, variously convey time, place, and zeitgeist; evoke emotion; and capture personality... Superb." -- The Horn Book, starred review

"Effective use of lengthy quotes throughout the text brings the immediacy of Kennedy's work and world view to the forefront… useful for students looking to learn more about great American leaders." -- School Library Journal

Praise for The Sixties Trilogy:

★ "Wiles palpably recreates the fear kids felt when air-raid sirens and duck-and-cover drills were routine... this story is sure to strike a chord with those living through tough times today." -- Publishers Weekly, starred review

★ "References to duct tape (then newly invented), McDonald's and other pop culture lend authenticity to this phenomenal story of the beginnings of radical change in America." -- Kirkus Reviews, starred review

★ "An ambitious, heady endeavor that succeeds wonderfully in capturing the atmosphere of that pivotal and eventful summer." -- The Horn Book, starred review

★ "Accessible and moving... will open many eyes to the brutal, not-so-distant past out of which a new standard of fairness and equality arose." -- Publishers Weekly, starred review

★ "An important book not to be missed." -- Booklist, starred review

★ "Should not be skipped." -- The Horn Book, starred review