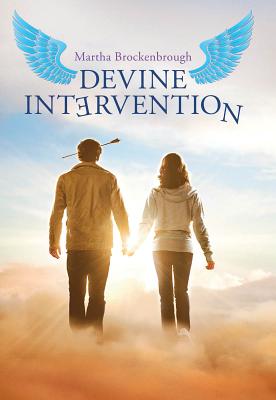 This is not that story.

Jerome Hancock is Heidi Devine's guardian angel. Sort of. He's more of an angel trainee, in heaven's soul-rehabilitation program for wayward teens. And he's just about to get kicked out for having too many absences and for violating too many of the Ten Commandments for the Dead.

Heidi, meanwhile, is a high school junior who dreams of being an artist, but has been drafted onto her basketball team because she's taller than many a grown man. For as long as she can remember, she's heard a voice in her head - one that sings Lynyrd Skynyrd, offers up bad advice, and yet is company during those hours she feels most alone.

When the unthinkable happens, these two lost souls must figure out where they went wrong and whether they can make things right before Heidi's time is up and her soul is lost forever.

Martha Brockenbrough's debut novel is hilarious, heartbreaking, and hopeful, with a sense of humor that's wicked as hell, and writing that's just heavenly.

Martha Brockenbrough is the author of two books for adults and five books for young readers, including The Game of Love and Death, which earned four starred reviews and was a Kirkus Prize finalist, Devine Intervention, and The Dinosaur Tooth Fairy. She lives in Seattle, Washington, with her husband and their two daughters. Visit her online at marthabrockenbrough.com.

“Brockenbrough devises a devilishly clever narrative, alternating Jerome's first-person account with Heidi's tightly focused third-person perspective…As the clock ticks down on Heidi's soul, readers will be rooting for both Jerome and Heidi with all their hearts.” -- Kirkus Reviews, starred review

“Jerome's bumbling logic and wickedly funny observations are what make Brockenbrough's first book for teens so much fun. Underneath the occasionally risqué humor and unexpected plot twists (including the possession of multiple animals' bodies) is an insightful story about seizing life for all it's worth while you have the chance.” -- Publishers Weekly

“This is a love story. Not a romantic love story, but a story of the development of a deep caring relationship with another being. Humorous and sad at times, it brings us to ask ourselves what we think about heaven and how we get there. Believable and fast-paced, it keeps us reading to the end.” -- Library Media Connection


Publisher's Weekly
Heroes don\u2019t get much more unlikely than Jerome Hancock, who met an early demise
courtesy of an arrow to the head. In the 16 years since, Jerome, frozen at age 17, has been
laboring through afterlife rehab, trying to make it into heaven. He\u2019s not promising
material, but he\u2019s game, sticking close to Heidi Devine, the soul he\u2019s been assigned for
guardian angel duty. \u201cHow much work could a baby be?\u201d he says. \u201cAlso, her mom was
hot, so I didn\u2019t mind hanging around one bit.\u201d Heidi grows up to be an awkward, selfconscious
teen, who thinks motormouth Jerome is just the voice inside her head until she
accidentally falls through pond ice and drowns, discovering that there is a soul that goes
along with that voice. But is Heidi really dead? Jerome\u2019s bumbling logic and wickedly
funny observations are what make Brockenbrough\u2019s first book for teens so much fun.
Underneath the occasionally risqu\u00e9 humor and unexpected plot twists (including the
possession of multiple animals\u2019 bodies) is an insightful story about seizing life for all it\u2019s
worth while you have the chance. Ages 12–up. - Jill Corcoran, the Herman Agency


Review: 'Devine Intervention' shows there's life in afterlifeMartha Brockenbrough's young adult debut is a snarky but sweet tale of teen angels in training.
By Susan Carpenter, Los Angeles Times
June 11, 2012
In Martha Brockenbrough's heaven, old people show too much leg playing leap frog, and the church choir covers classic rock. Clearly, Brockenbrough is not a follower of the New Testament.
That's good news for heathen readers who will delight in the author's absurdist take on the after life in her devilishly riotous young adult debut, \u0022Devine Intervention.\u0022 Steeped in the heavenly tropes of guardian angels and lost souls, \u0022Devine Intervention\u0022 is a satire in the vein of Libba Bray's \u0022Beauty Queens,\u0022 only with a decidedly sacrilegious twist.
It opens with a page from a handbook that is sent, upon death, to select members of SRPNT—the Soul Rehab Program for Nefarious Teens (Deceased) — in an effort to combat the \u0022growing problem of crowding in the lower levels of Hell.\u0022 One of those teens is a 17-year-old named Jerome, who had the misfortune of being punctured in the forehead by a friend's wayward arrow and finds himself at the pearly gates that are festooned with motivational posters and guarded by a man with \u0022a mustache the size of a harmonica.\u0022
Jerome reacts as any dead teen would when denied immediate entrance and given specific rules to follow to reclaim his soul. He misplaces the handbook and proceeds to violate its Ten Commandments for the Dead.
Among his soul rehab assignments was playing guardian angel to 16-year-old Heidi, but the one time he was really needed, Jerome was too busy yukking it up with a fellow SRPNT member to prevent Heidi from walking across a frozen pond and falling through the ice to her death. Now Heidi and Jerome are both in soul limbo.
The two are quite the odd couple. Heidi is a \u0022not hot ... cross-dressing lumberjack,\u0022 according to one of the book's uncharitable bit players. Jerome is a sexually frustrated virgin. But in death, their relationship is like an old marriage — more familiar than romantic, as well as conflicted, especially once Heidi realizes Jerome may have jeopardized her soul through sheer laziness.
They do have one thing in common that's likely to resonate with the book's intended audience. Neither Jerome nor Heidi felt loved by friends or family or were especially true to themselves when living. Death allows them to witness loved ones from another plane like a scene from Charles Dickens' \u0022A Christmas Carol.\u0022 Seeing others grieve their absence builds the self esteem of these troubled souls and brings some emotional heft to a story where comedy dominates.
\u0022Devine Intervention\u0022 is told in chapters that volley between a third-person perspective on Heidi and first-person narratives about Jerome. While both perspectives are written with searingly inventive humor, it's Jerome's voice that will have readers flipping pages as quickly as they can turn them to see what he'll have to say next.
Brockenbrough is a gifted writer who finds amusement in focusing on life's minutiae and who captures the slow-mo drama with which teens experience them, such as the time when Heidi's \u0022tongue felt like a lump of nasty cotton living in the armpit of a bum who has an apartment at the dump and not even the good kind of dump with busted car parts. The kind with fish heads ... and old transvestite wigs.\u0022
It is a pleasure to read a writer who so delights in language, and who writes so captivatingly in a teen voice with such imaginative description.
The story isn't without its flaws, however. The timeline of certain scenes is confusing, including the lead-up to the book's conclusion, which sees Heidi's fading soul morph in and out of a dog's body. But for readers who appreciate an apocryp