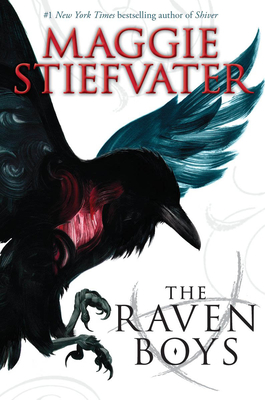 This is book number 1 in the The Raven Cycle series.

"Raven Boys was one of my favorite books of 2012. Pulsing with mystical overtones and the mesmerizing thrum of ancient magic, Raven Boys
follows a group of unusual boys on a quest to find an enchanted Welsh
king along with a girl destined to kill one amongst them. A must-read
for its brilliant cast of characters alone, this exhilarating fantasy
defies easy description in the best possible way and is an excellent
choice for adult fantasy fans as well as teens."

“Blue has grown up in a house full of women psychics who have foretold certain death for her first love. She unwillingly becomes friends with a gaggle of boys, the Raven Boys, from the very expensive private school in town. They're on the search for a mythical king who is said to grant a wish to whoever finds him. Will Blue's ability to intensify the magic around them help on their quest or put them in danger? The Raven Boys will pull you into their thrilling journey.”
— Hannah Johnson-Breimeier, Next Chapter Bookshop, Mequon, WI

Every year, Blue Sargent stands next to her clairvoyant mother as the soon-to-be dead walk past. Blue never sees them--until this year, when a boy emerges from the dark and speaks to her.

His name is Gansey, a rich student at Aglionby, the local private school. Blue has a policy of staying away from Aglionby boys. Known as Raven Boys, they can only mean trouble.

But Blue is drawn to Gansey, in a way she can't entirely explain. He is on a quest that has encompassed three other Raven Boys: Adam, the scholarship student who resents the privilege around him; Ronan, the fierce soul whose emotions range from anger to despair; and Noah, the taciturn watcher who notices many things but says very little.

For as long as she can remember, Blue has been warned that she will cause her true love to die. She doesn't believe in true love, and never thought this would be a problem. But as her life becomes caught up in the strange and sinister world of the Raven Boys, she's not so sure anymore.

Praise for The Scorpio Races:

* "Masterful. Like nothing else out there now." - Kirkus Reviews, starred review

* "Filling it with loving descriptions of wet, wind-tossed Thisby as well as exciting equine action, Stiefvater has created a thrilling backdrop for the love story that blooms...A book appealing to lovers of fantasy, horse stories, romance, and actionadventure alike, this seems to have a shot at being a YA blockbuster." - School Library Journal, starred review

* “A lyrical tale of alienated werewolves and first love….Stiefvater skillfully increases the tension throughout; her take on werewolves is interesting and original while her characters are refreshingly willing to use their brains to deal with the challenges they face.” – Publishers Weekly, starred review

“Readers will be able to enjoy Stiefvater's fast-paced storytelling and dedication to the old-fashioned art of creating a believable and enduring romance. Shiver is beautifully written, even poetic at times, and a perfect indulgence for readers of all ages.” – Bookpage.com

“This riveting narrative, impossible to put down, is not only an excellent addition to the current fangs and fur craze, but is also a beautifully written romance that, along with Shiver, will have teens clamoring for the third and final entry.” – VOYA