The Dream Thieves (The Raven Cycle, Book 2): Book 2 of the Raven Boys (Hardcover) 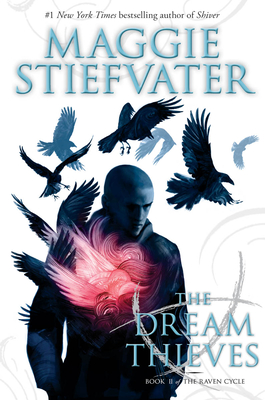 This is book number 2 in the The Raven Cycle series.

One secret: Ronan can bring things out of his dreams.

And sometimes he's not the only one who wants those things.

Ronan is one of the raven boys - a group of friends, practically brothers, searching for a dead king named Glendower, who they think is hidden somewhere in the hills by their elite private school, Aglionby Academy. The path to Glendower has long lived as an undercurrent beneath town. But now, like Ronan's secrets, it is beginning to rise to the surface - changing everything in its wake.

Of THE RAVEN BOYS, ENTERTAINMENT WEEKLY wrote, "Maggie Stiefvater's can't-put-it-down paranormal adventure will leave you clamoring for book two." Now the second book is here, with the same wild imagination, dark romance, and heart-stopping twists that only Maggie Stiefvater can conjure.

Praise for THE DREAM THIEVES:

* "Richly written and filled with figurative language…this story of secrets and dreams, of brothers and of all-too-real magic is an absolute marvel of imagination and an irresistible invitation to wonder." --BOOKLIST, starred review

* "Mind-blowingly spectacular… Stiefvater's careful exploration of class and wealth and their limitations and opportunities astounds with its sensitivity and sophistication. The pace is electric, the prose marvelously sure-footed and strong, but it's the complicated characters…that meld magic and reality into an engrossing, believable whole." -- KIRKUS REVIEWS, starred review

* "A paranormal thriller…this installment [is] more tense and foreboding than its predecessor–and every bit as gripping." -- PUBLISHERS WEEKLY, starred review

* "A complex web of magical intrigue and heartstopping action." -- THE BULLETIN, starred review

* "Readers who want a moody chill and appreciate an atmospheric turn of phrase will want to spread more time in Henrietta." -- SCHOOL LIBRARY JOURNAL, starred review

* "One unexpected and wonderful surprise after another . . . a marvel of imagination." -- BOOKLIST, starred review

"The Raven Boys is an incredibly rich and unique tale, a supernatural thriller of a different flavor. . . . Fans have been salivating for Stiefvater's next release and THE RAVEN BOYS delivers." -- SCHOOL LIBRARY JOURNAL, starred review

"Equal parts thriller and mystery, with a measured dash of romance sprinkled on top . . .
Maggie has woven such a unique, intriguing narrative that I struggled for comparisons." -- MTV.com

A PUBLISHERS WEEKLY Best Book of the Year

"Book two of Stiefvater’s Raven Cycle shifts from character-driven voyage of discovery to more of a paranormal thriller, ratcheting up the violence as the plot grows more complex. After the transformative events at Cabeswater in The Raven Boys, the context in which Gansey, Blue, Adam, Ronan, and Noah operate is further altered by the arrival of the Gray Man, a self-described hit man who replaces Barrington Whelk in providing occasional adult narrative perspective. The Gray Man brings with him the machinations of larger, previously unknown forces as he takes orders from a voice on the phone to hunt the Greywaren, the identity of which is revealed early on. But this book largely belongs to the loose cannon that is Ronan, as he works to better understand his supernatural abilities and their connection to his family. While Stiefvater’s offbeat, acutely observed characters continue to grow, they have shifted from developing a group interaction to reacting against one another, making this installment more tense and foreboding than its predecessor—and every bit as gripping." - Publishers Weekly starred review

"In this continuation of The Raven Boys (2012), Printz Honor Book recipient Stiefvater continues the compelling story, keeping the focus once again on the Raven Boys themselves: privileged Gansey, tortured Adam, spectral Noah, and darkly dangerous Ronan. This time, though, their quest for the legendary sleeping Welsh King, Owen Glendower, takes a backseat to a spate of secrets, dreams, and nightmares that appear to be sapping the ley line— an invisible channel of energy connecting sacred places—that runs beneath their small Virginia town. Could this be the reason that the mystical forest, Cabeswater, has inexplicably disappeared? Who is the mysterious Grey Man, and why is he searching for the Greywaren, a relic that enables its owner to steal objects from dreams? How does this involve secretive Ronan? Visceral suspense builds as the characters pursue answers to these and other questions, and a palpable sense of foreboding and danger increasingly permeate the novel. Richly written and filled with figurative language (buildings are “tidy as library books;” a “murmur of guests” attend a party; a woman looks “fresh as a newscaster”), this story of secrets and dreams, of brothers and of all-too-real magic is an absolute marvel of imagination and an irresistible invitation to wonder." - Booklist starred review

"Beginning the same summer in which The Raven Boys (Scholastic, 2012) ended, The Dream Thieves is a little less about Blue Sargent and more about Gansey. Richard Campbell Gansey III (don’t call him Dick), Ronan, Adam, ghostly Noah, and Joseph Kavinsky are (or were) raven boys–students at posh Aglionby Academy in the small Virginia town of Henrietta. The writing style maintains a dark and brooding tone as Gansey continues to investigate the existence of a ley line, an invisible channel of energy, recently awakened, that may lead them to the ancient Welsh king Glendower. The complicated relationships and plot points are difficult to follow without the background from The Raven Boys. Even with the background, new characters appear: the deadly (perhaps) Gray Man, Greenmantle, and the idea of a Greywaren. Blue comes from a family of women with psychic gifts, but her gift isn’t “sight” itself but a talent for magnifying the presence of magic around her–a significant contribution where finding the ley line is concerned. Readers looking for answers won’t find them in this book. Readers who want a moody chill and appreciate an atmospheric turn of phrase (keys hang from the ignition like “ripe fruit,” a farm yard is populated with “deceased pick-up trucks”) will want to spend more time in Henrietta. Purchase where the first book is popular, and suggest the series to fans of Holly Black’s “Curse Workers” books (S & S) or to readers of grittier works such as Andrew Smith’s The Marbury Lens (2010) and Passenger (2012, both Feiwel & Friends)." - School Library Journal starred review