The Dream Thieves (The Raven Cycle, Book 2): Book 2 of the Raven Boys (CD-Audio) 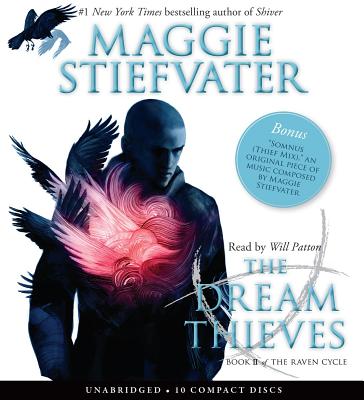 By Maggie Stiefvater
$39.99
Backordered. Place an order and we will let you know when to expect your book.

This is book number 2 in the The Raven Cycle series.

Now that the ley lines around Cabeswater have been woken, nothing for Ronan, Gansey, Blue, and Adam will be the same. Ronan, for one, is falling more and more deeply into his dreams, and his dreams are intruding more and more into waking life. Meanwhile, some very sinister people are looking for some of the same pieces of the Cabeswater puzzle that Gansey is after....

Maggie Stiefvater is the #1 New York Times bestselling author of the novels Shiver, Linger, Forever, and Sinner. Her novel The Scorpio Races was named a Michael L. Printz Honor Book by the American Library Association. The first book in The Raven Cycle, The Raven Boys, was a Publishers Weekly Best Book of the Year and the second book, The Dream Thieves, was an ALA Best Book for Young Adults. The third book, Blue Lily, Lily Blue, received five starred reviews. The final book, The Raven King, received four. She is also an artist and musician. She lives in Virginia with her husband and their two children. You can visit her online at maggiestiefvater.com.

* "Stiefvater's novel, inspired by Manx, Irish, and Scottish legends of beautiful but deadly fairy horses that emerge from the sea each autumn, begins rivetingly and gets better and better . . . all the way, in fact, to best." -- HORN BOOK REVIEW, starred review

* "Masterful . . . like nothing else out there now." -- KIRKUS REVIEWS, starred review

* "A book with cross-appeal to lovers of fantasy, horse stories, romance, and action-adventure, this seems to have a shot at being a YA blockbuster." -- BOOKLIST, starred review

* "Up--On the sea-battered and wind-swept isle of Thisby, fall brings the famed and feared capaill uisce, or water horses, and with them, death . . . The author takes great liberties with the Celtic myth, but the result is marvelous." -- SCHOOL LIBRARY JOURNAL, starred review

"Stiefvater not only steps out of the young adult fantasy box with THE SCORPIO RACES but crushes it with pounding hooves. . . . If THE SCORPIO RACES sounds like nothing you've ever read, that's because it is." -- THE NEW YORK TIMES BOOK REVIEW

"Tactile world-building, an island full of compelling characters, and the budding romance between Sean and Puck all make for an unforgettable book that's quite unlike anything else out there." -- NPR BOOKS

"With this beautifully executed drama, Stiefvater has established herself as one of the finest YA novelists writing today." -- ENTERTAINMENT WEEKLY