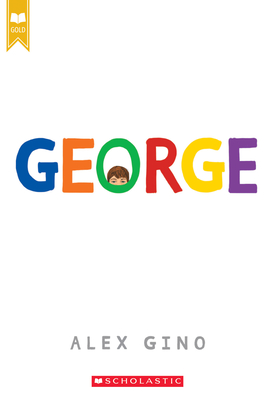 "Readers young and old will connect with this uplifting, personal look at one kid's struggle to be herself despite how others see her. Navigating complex territory with utter simplicity, George's story will resonate with anyone who has ever felt different."

George thinks she'll have to keep this a secret forever. Then her teacher announces that their class play is going to be Charlotte's Web. George really, really, REALLY wants to play Charlotte. But the teacher says she can't even try out for the part . . . because she's a boy.

With the help of her best friend, Kelly, George comes up with a plan. Not just so she can be Charlotte -- but so everyone can know who she is, once and for all.

Alex Gino loves glitter, ice cream, gardening, awe-ful puns, and stories that reflect the diversity and complexity of being alive. George was their first novel. George was a winner of the Children's Stonewall Award, the Lambda Literary Award, and the Children's Choice Book Awards, among a host of others. George was also featured on several Best of the Year lists. For more about Alex, please visit alexgino.com.

"Insightful...it'll resonate with anyone who has ever felt different." - People Magazine

"George is a timely book for parents to share and discuss with their children, whether dealing with similar issues or simply to foster understanding." - Entertainment Weekly

"Readers going through a similar experience will feel that they are no longer alone, and cisgender (non-transgender) readers may gain understanding and empathy." -- BookPage

"Reading this breathtaking debut should be a requirement for living." #6 on the Indie Next Autumn '15 List - Marisa DiNovis, Flyleaf Books, Chapel Hill, NC