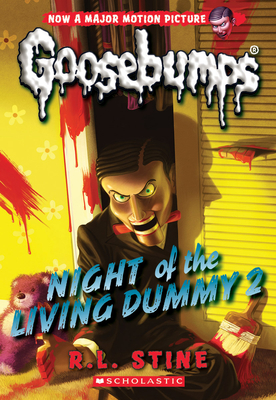 This is book number 25 in the Classic Goosebumps series.

The original series from the Master of Fright--now a major motion picture in theaters October 16, 2015!The original books featuring the scariest creatures from the Goosebumps movie, in theaters October 16, 2015!Amy's ventriloquist dummy, Dennis, has lost his head…for real. So Amy begs her family for a new dummy. That's when her dad finds Slappy in a local pawnshop. Slappy's kind of ugly, but at least his head stays on!Amy loves practicing her new comedy routine. It's like this dummy knows what she's thinking. Like he can move by himself. And it's a lot of fun…until Slappy starts a routine of his own. A nasty horrible, routine that isn't funny at all.Slappy may have a new owner, but he's up to the same old tricks...

R.L. Stine is the creator of the bestselling Goosebumps series, which has more than 400 million copies in print worldwide and celebrated 25 years in 2017. Goosebumps is one of the bestselling children's series of all-time and inspired a popular television show, as well as a feature film starring Jack Black that opened at #1 at the box office. His other popular children's books include the series Fear Street, Mostly Ghostly, The Nightmare Room, and Rotten School, and his picture books, with Marc Brown, The Little Shop of Monsters and Mary McScary. R.L. Stine lives in New York City. You can connect with him on Twitter at @RL_Stine or Facebook: facebook.com/rlstine. For more information, visit rlstine.com and scholastic.com/goosebumps.