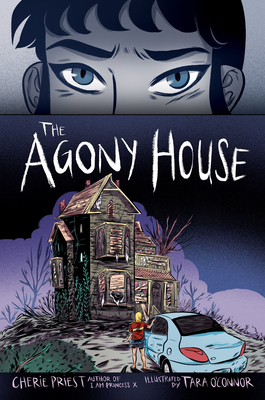 By Cherie Priest, Tara O'Connor (Illustrator)
$18.99
Out of Stock; Usually Arrives in 2-5 Days

Denise Farber has just moved back to New Orleans with her mom and step-dad. They left in the wake of Hurricane Katrina and have finally returned, wagering the last of their family's money on fixing up an old, rundown house and converting it to a bed and breakfast.

Nothing seems to work around the place, which doesn't seem too weird to Denise. The unexplained noises are a little more out of the ordinary, but again, nothing too unusual. But when floors collapse, deadly objects rain down, and she hears creepy voices, it's clear to Denise that something more sinister lurks hidden here.

Answers may lie in an old comic book Denise finds concealed in the attic: the lost, final project of a famous artist who disappeared in the 1950s. Denise isn't budging from her new home, so she must unravel the mystery-on the pages and off-if she and her family are to survive...

Cherie Priest is the author of I Am Princess X, her debut young adult novel which earned three starred reviews and was a YALSA Quick Pick for Reluctant Young Adult Readers. She is also the author of more than a dozen adult science fiction, fantasy, and horror novels, including Boneshaker, which won the Locus Award for Best Science Fiction Novel. She lives in Seattle, Washington and can be found online at www.cheriepriest.com and @cmpriest.

Tara O'Connor is a comic maker and illustrator currently residing in the New Jersey wilderness. When she's not drawing or teaching comics, she's probably working on an illustration of some sort. She is the author of Roots and The Altered History of Willow Sparks. You can find more of Tara's art online at www.taraocomics.com.

Advance Praise for The Agony House:

* "Priest pairs with O'Connor to neatly weave together the history of comic books and contemporary concerns about gentrification into an eerie ghost story set in a ramshackle house that's as much a character as the people living in it.... Priest does a great job of skillfully including the important conversations Denise and her family have with their new community. At its heart, though, this is a ghost story, and Priest excels at building palpable atmosphere: Denise's parents' anxiety about their shoestring budget, the sweltering New Orleans summer heat, the disrepair of the house ("soggy plaster fell from the studs like wet cake"), and the increasingly terrifying haunting. Dynamic characters and a surprising mystery round out this sharp, satisfying, and engrossingly spooky story." -- Booklist, starred review

"Priest ably weaves contemporary issues and a feminist strand into this fantasy as, while briskly fending off ghostly visitations and searching out clues to the house's violent past, Denise makes new friends and encounters pushback from some St. Roch neighbors rightfully leery of white gentrifiers. Highlighted by a wonderfully melodramatic climax, the author brings her plotlines to upbeat resolutions with a thrilling discovery, a revelation about the comic's author, and a degree of general community acceptance of Denise and her family. Nearly every character's race, white or black, is carefully but unobtrusively specified. O'Connor inserts multiple pages from the comic and atmospheric stand-alone illustrations all printed in haint blue. Conflicts, ectoplasmic and otherwise, laid to rest in a deliciously creepy setting." -- Kirkus Reviews

Praise for I Am Princess X:

*"Priest's YA debut is an engrossing cyberthriller packed with a puzzling mystery, crackerjack detective work, and an eerie, atmospheric sense of place. Teens who roll their eyes at adults out of touch with Internet culture will eat this up." -- Booklist, starred review

*"Fresh and contemporary, this hybrid novel/comic packs a lot of plot in a relatively short book, but its strongest suit may be Priest's keen understanding of the chasmic gap between the way teens and adults engage in the landscape of the Internet." -- Publishers Weekly, starred review