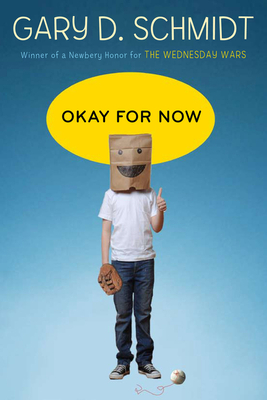 “Following The Wednesday Wars, Doug Swieteck returns as he and his family move to 'stupid' Marysville in upstate New York. Completely awed by his hero, Yankee baseball player Joe Pepitone, and trying valiantly to be nothing like his abusive, often drunken father, Doug has more than his share of obstacles. It's 1968: Doug's brother is in Vietnam, the Apollo 11 moonwalk is nearing, and Doug is hiding two big secrets. Phenomenal characters and impossible odds make this tale of an amazing young man funny, tender, and inspiring.”
— Jane Morck, Third Place Books, Lake Forest Park, WA

2011 National Book Award FinalistAs a fourteen-year-old who just moved to a new town, with no friends and a louse for an older brother, Doug Swieteck has all the stats stacked against him. So begins a coming-of-age masterwork full of equal parts comedy and tragedy from Newbery Honor winner Gary D. Schmidt. As Doug struggles to be more than the “skinny thug” that his teachers and the police think him to be, he finds an unlikely ally in Lil Spicer—a fiery young lady who “smelled like daisies would smell if they were growing in a big field under a clearing sky after a rain.” In Lil, Doug finds the strength to endure an abusive father, the suspicions of a whole town, and the return of his oldest brother, forever scarred, from Vietnam. Together, they find a safe haven in the local library, inspiration in learning about the plates of John James Audubon’s birds, and a hilarious adventure on a Broadway stage. In this stunning novel, Schmidt expertly weaves multiple themes of loss and recovery in a story teeming with distinctive, unusual characters and invaluable lessons about love, creativity, and survival.

Gary D. Schmidt is the best-selling author of many books for young readers, including Just Like That; National Book Award finalist Okay for Now; Pay Attention, Carter Jones; Orbiting Jupiter; the Newbery Honor and Printz Honor Book Lizzie Bright and the Buckminster Boy; and the Newbery Honor Book The Wednesday Wars. He is a professor of English at Calvin University in Grand Rapids, Michigan.

"This is Schmidt's best novel yet—darker than The Wednesday Wars and written with more restraint, but with the same expert attention to voice, character and big ideas." — Kirkus Reviews (starred review)

"The book is exceptionally well written. Schmidt creates characters that will remain with the reader long after the book is done. Doug’s voice is unforgettable as he tries to help and protect his mom.... While there is much stacked against him, he is a character filled with hope that the reader cannot help but root for. Push this one on readers; they will not be sorry.... Schmidt writes a journal-type story with a sharp attention to detail, patterns in the story line, and an unexpected twist at the end."
— VOYA