A Long Walk to Water: Based on a True Story (Paperback) 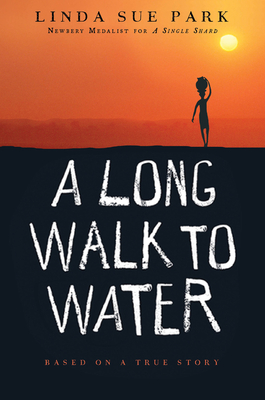 By Linda Sue Park, Ginger Knowlton
$8.99
On Our Shelves Now

Cherished by millions of readers, this #1 New York Times best-selling novel is a powerful tale of perseverance and hope. Newbery Medalist Linda Sue Park interweaves the stories of two Sudanese children who overcome mortal dangers to improve their lives and the lives of others.

A Long Walk to Water begins as two stories, told in alternating sections, about two eleven-year-olds in Sudan, a girl in 2008 and a boy in 1985. The girl, Nya, is fetching water from a pond that is two hours’ walk from her home: she makes two trips to the pond every day. The boy, Salva, becomes one of the “lost boys” of Sudan, refugees who cover the African continent on foot as they search for their families and for a safe place to stay. Enduring every hardship from loneliness to attack by armed rebels to contact with killer lions and crocodiles, Salva is a survivor, and his story goes on to intersect with Nya’s in an astonishing and moving way. Includes an afterword by author Linda Sue Park and the real-life Salva Dut, on whom the novel is based, and who went on to found Water for South Sudan.

Linda Sue Park is the author of the Newbery Medal-winning A Single Shard, the best-seller A Long Walk to Water, and the highly-praised novel Prairie Lotus. She has also written several acclaimed picture books and serves on the advisory board of We Need Diverse Books. She lives in western New York with her family. www.lindasuepark.com, Twitter: @LindaSuePark

"There have been several books about the lost boys of Sudan for adults, teens, and even for elementary-school readers. But [this] spare, immediate account, based on a true story, adds a stirring contemporary dimension. . . . Young readers will be stunned by the triumphant climax."  —Booklist, starred review

"Two narratives intersect in a quiet conclusion that is filled with hope."—School Library Journal, starred review

"This powerful dual narrative packs suspense and introspection into Park's characteristic spare description; while there are lots of details offered to the reader, they come not in long, prosaic lines but in simple, detached observations. Both Salva's and Nya's stories are told with brutal, simple honesty, and they deliver remarkable perspective on the Sudanese conflict. The novel's brevity and factual basis makes the reality of life in Sudan very accessible, and readers will find both the story and the style extremely moving."—The Bulletin

"Park simply yet convincingly depicts the chaos of war and an unforgiving landscape. . . . A heartfelt account."—Kirkus Reviews

"Brilliant. . . . A touching narrative about strife and survival on a scale most American readers will never see."— Book Page

"[A] fast, page-turning read. . . . A great book for high school students and an important novel for young adults who enjoy learning about other world cultures."—VOYA