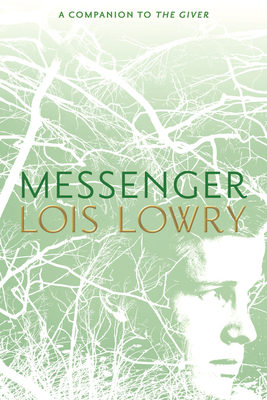 This is book number 3 in the Giver Quartet series.

The third book in Lois Lowry's Giver Quartet, which began with the bestselling and Newbery Medal-winning The Giver.

Trouble is brewing in Village. Once a utopian community that prided itself on welcoming strangers, Village will soon be cut off to all outsiders.

As one of the few able to traverse the forbidding Forest, Matty must deliver the message of Village’s closing and try to convince Seer’s daughter Kira to return with him before it’s too late. But Forest is now hostile to Matty as well. Now he must risk everything to fight his way through it, armed only with an emerging power he cannot yet explain or understand.

"Told in simple, evocative prose, this companion to The Giver and Gathering Blue can stand on its own as a powerful tale of great beauty." —Kirkus (starred review)

Messenger is the masterful third novel in Lois Lowry’s Giver Quartet, which includes The Giver, Gathering Blue, and Son.

Lois Lowry is the author of more than forty books for children and young adults, including the New York Times bestselling Giver Quartet and popular Anastasia Krupnik series. She has received countless honors, among them the Boston Globe-Horn Book Award, the Dorothy Canfield Fisher Award, the California Young Reader’s Medal, and the Mark Twain Award. She received Newbery Medals for two of her novels, Number the Stars and The Giver.

"Lowry masterfully presents another thought-provoking, haunting tale in this third novel, a companion to The Giver and Gathering Blue." Publishers Weekly, Starred

"Lowry moves far beyond message, writing with a beautiful simplicity rooted in political fable, in warm domestic detail, and in a wild natural world, just on the edge of realism." Booklist, ALA, Starred Review

"Told in simple, evocative prose, this companion to The Giver (1993) and Gathering Blue (2000) can stand on its own as a powerful tale of great beauty." Kirkus Reviews, Starred —